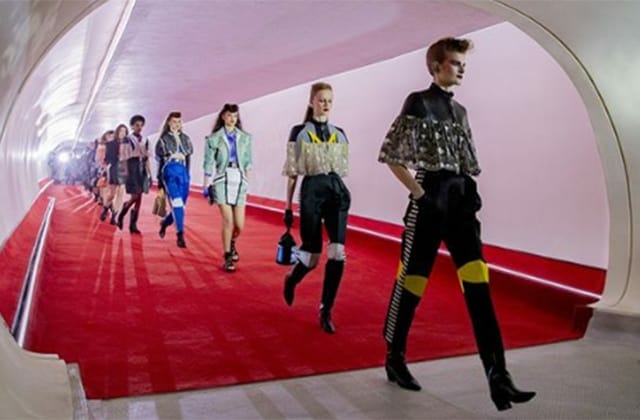 It was a journey to remember as Nicolas Ghesquière brought the fash pack to the TWA Flight Center for a ride they wouldn't forget...

An uncommon site that is slowly becoming a piece of American history, the TWA Flight Center, served as the backdrop to Louis Vuitton’s Cruise 2020 showcase. The 1962-built masterpiece (designed by the architect Eero Saarinen) is one of, if not, John F. Kennedy airport’s architectural treasure – and it was beautifully dotted with a slew of greenery that certainly brightened up the now-hotel.

Marking the first time a fashion show has been staged at the location, there couldn’t have been a more fitting time for the French fashion house to showcase their new trans-seasonal collection there.

For Cruise 2020, Louis Vuitton‘s Creative Director takes us on a journey – literally and figuratively. Nicolas Ghesquière perfectly translated the exhilaration that comes with departing from a location to heading back home. In this case, it’s between Paris and New York, as the long-running conversation began with the brand’s first trans-Atlantic crossings. And continues with the Cruise 2020 collection. 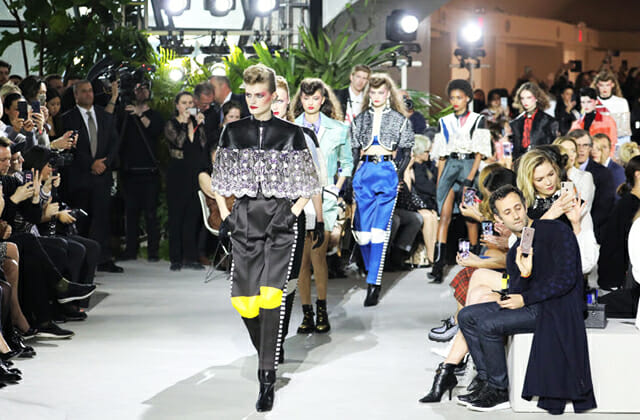 The silhouettes saw a fusion of savoir-faire and creative innovation as models strutted the runway in strong forms and structurally appealing ensembles. Whilst embroideries, prints, elegant brocade and sequins were aplenty, there were a few uniform-like pieces that boasted a darker approach to trans-seasonal dressing (think dark monochrome looks and extremely sophisticated looks).

Also, let’s not forget the manifest abundance of ’80s references spotted in the collection. Big shoulders, popping beauty looks and lots of colours (acidic shades, too) stirred the punk rock ambience. Plus, there were prints of New York City’s skyline captured on some of the pieces.

Speaking of the show location, Nicolas said in a statement: “I was lucky enough to have landed at the TWA Flight Center in the late Nineties. It was something I could never forget. This place was forgotten for twenty years, and now has come back to life. It’s like a sanctuary that’s been revived and seeing it enchant anew in a different iteration, as a hotel, is a great pleasure. It’s about rediscovering of an uncommon place that yet is a part of American heritage.”