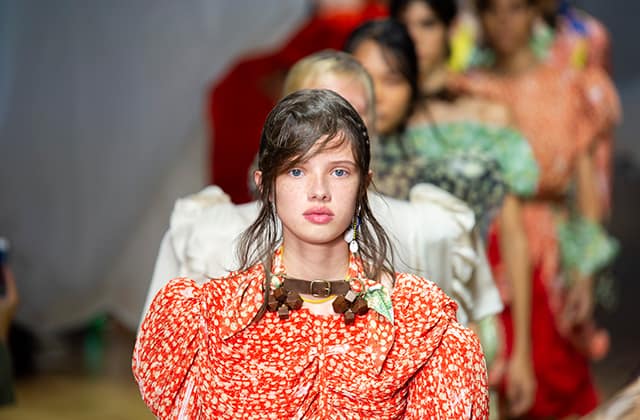 If you've got plans to jet-set to the UK this month, make sure you stop by the V&A's dreamy Preen by Thornton Bregazzi runway showcase...

A relatively new crop of museums are bringing some of the world’s worthy fashion creations to the fore and this year, London’s Victoria & Albert Museum’s Fashion in Motion series is partnering up with Preen by Thornton Bregazzi for four free-to-attend catwalk shows.

Set to take place later this month on June 21, the show will feature a collection of current and archival pieces chosen to represent floral motifs and pagan references — all signature influences from the celebrity-approved brand.

According to Fashion United, Thornton and Bregazzi released a statement and said: “As a west London-based brand, having the V&A on our doorstep is such a blessing — the museum has always been an endless source of inspiration for our designs.”

As to what to expect from the showcase, the designer duo continued: “First stop on a visit is always the Ceramics Galleries for the amazing collection of decorated porcelain. Elements of Victorian culture and costume seep into our collections and the floral motifs of the arts and crafts movement often form the basis of our signature prints. We feel honoured to show our work in an institution that has been so formative to Preen’s brand DNA.”

Preen by Thornton Bregazzi is the latest name to join the museum’s Fashion in Motion list of designers that have been previously featured at the museum including Alexander McQueen, Jean Paul Gaultier, Vivienne Westwood and Yohji Yamamoto.

Now, find out what you can expect from Christian Louboutin’s upcoming exhibition in Paris.