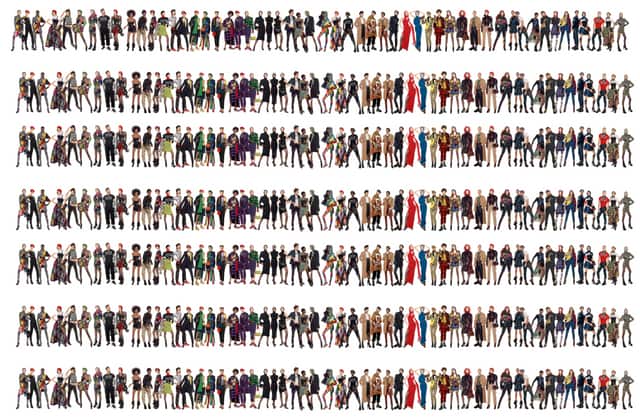 Leave it to Donatella to have people talking. After all, why employ one face when you can have 54?!

By now, we all well know that advertising campaigns are a way for brands to convey the spirit of the season via its own imagery in the hope to help drive sales from consumers in stores and online. As such, brands employ different approaches to these seasonal campaigns, from hiring new faces to tapping new photography talent and so on. However this season, Versace has adopted the mantra ‘go big or go home’, hiring not one, not two, but 54 models to appear in its Fall/Winter 2018 campaign.

In what the brand is describing as the “longest-ever advertising image” the campaign features a range of different models that highlight the brand’s approach to inclusivity. In a release, the brand said that image, which was shot by Steven Meisel, “is a true representation of clans that embody everything Versace stands for — diversity expressed together with innovation in the fearless representation of what it means to be daring.”

Donatella said in the statement, “My team doesn’t just extend to my work team. The Versace Clans are made of all members of the Versace family — from customers to models, fans, photographers, stylists, friend, artists and all who believe that staying relevant means moving forward and making your voice heard — all who believe that fashion is not a way to just say ‘look at me’ but rather ‘look at me, I have something to say.'”

In the line-up there are plenty of famous faces to be spotted including Gigi and Bella Hadid, Kaia Gerber, Stella Maxwell, Adut Akech (who recently closed Chanel’s couture show in Paris), Julia Nobis and Moroccan model Nora Attal.

Hilariously, following on from her explanation earlier on in the year as to how the brand’s name is actually pronounced, the campaign’s accompanying video reiterates the pronunciation with the help of some of the aforementioned talents. See it below…

Now, find out why Victoria’s Secret might be headed for closure.