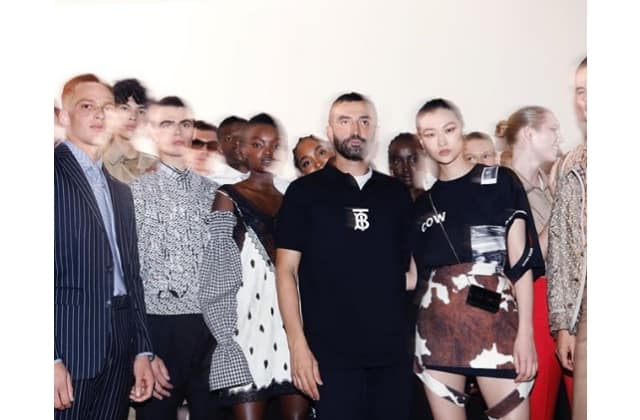 Riccardo Tisci made his long-awaited debut for Burberry overnight. Here's what everyone is talking about this morning...

There was so much hype in the lead-up to Riccardo Tisci‘s debut show for Burberry overnight and the former Givenchy designer delivered a show that was all about elegance and simplicity. The designer showcased 134 looks in total across men’s and womenswear so whilst the silhouettes may have been pared back, the impact was anything but.

The designer sent several versions of his own reworked trench down the runway, belted on top of an array of work-ready skirts that we’re already wishlisting. The colour palette was distinctly muted to begin with beiges, caramels, chocolate browns and black ruling most of the looks save for a few pops of print (in the form of polka dots and animal prints) before getting slightly more colourful in the final looks where corals, mints and reds were introduced. The menswear was slick, too, with suiting and outerwear tailored to perfection with an air of ease about them.

The accessories were also a highlight. We got the first glimpse of Riccardo’s handbag designs for the brand via top handle structured totes and there was an array of scarves used to tie jackets and adorn buns. However the most out-there accessory we spotted was what can only really be described as umbrella holsters worn by the male models that secured around the waist.

Models included Kendall Jenner (for whom it was the first runway of fashion month), Jourdan Dunn, Natalia Vodianova and Lily Donaldson, and the show was set in a post office warehouse in London that had been transformed into a dramatically chic space with what looked to be some of the comfiest front row seating we’ve seen in a while.

Discover some of the top looks below…

Want to see the whole thing? Watch the replay of our livestream here.

If this phase one, we can’t wait to see what else the designer has up his trench coat-ed sleeve for the seasons to come.

Select pieces from the runway are now available to purchase through the brand’s Instagram account until 830pm local time (GMT +4) this evening. Happy shopping!