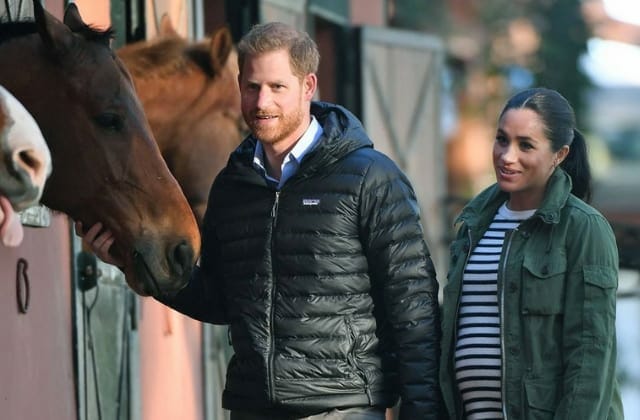 The Duchess of Sussex has worn a lot of beautiful statement pieces while on tour in Morocco. But we adore this casual-meets-utility ensemble which as it happens, includes one of her favourite brands...

Prince Harry and Meghan Markle’s three-day tour of Morocco is coming to an end today. Since arriving in Casablanca on 24 February, the royal couple have been on a circuit of official engagements and it’s been go-go-go. And of course, this meant a lot of wardrobe changes along the way for Markle – which can’t be easy being as far along in her pregnancy as she is but she’s been a real champ about it.

First she lit up the internet in this red-hot Valentino gown, then came out in an ethereal custom Dior gown and then she gave the world her Markle Sparkle in this blue Carolina Herrera dress – which we totally need for summer, FYI.

And now, after putting out all the high-style stops, she went for a more casual-meets-utility look wearing a J.Crew khaki jacket. The royal pair visited the Moroccan Royal Federation of Equestrian Sports in Rabat to learn more about its programme to help children with special needs through equine therapy. Markle opted to pair the utility-style jacket with black jeans, boots and a Breton striped top which looked oh-so-comfy and appropriate for the occasion.

It’s not the first time Markle’s turned to J.Crew for royal outings. Remember when she attended the Sentebale Polo Cup sporting a J.Crew clutch? And then last International Women’s Day she wore a statement midnight blue J. Crew coat? It’s clear she finds sartorial comfort in the brand and looks so good in their pieces too.

That’s it from Meghan’s Moroccan (wardrobe) odyssey – now the couple will make their way back to London as they finish up their overseas engagement before becoming parents in April.

Now, find out how long it took to make Emma Stone’s Oscar dress.