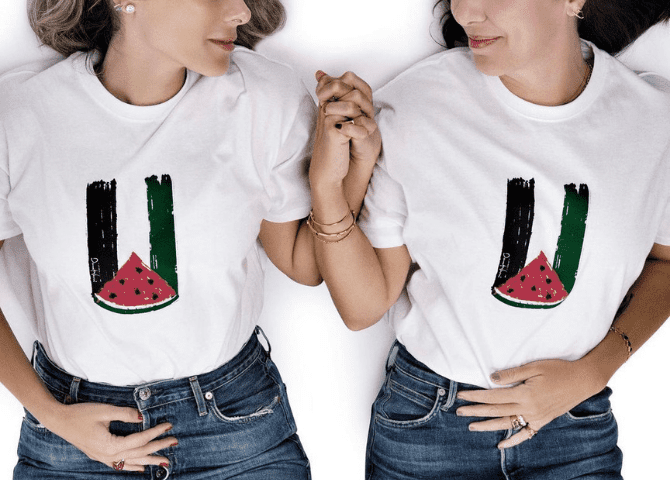 'Raise Your Watermelon' T-shirts are now available to purchase, courtesy of this collaboration...

For weeks, the world has been calling for an end to decades of oppression, terror, and violence of Israeli apartheid. Not just Arabs but people across the globe have stood up for humanity and shown unity in their respective cities and if you’re feeling hopeless, we’ve got a (fashionable) way for you to help. Donna Hourani and Basma Abu Ghazaleh (Founder of Kage) have teamed up to launch an initiative that highlights their solidarity with oppressed brothers and sisters worldwide.

The ‘Raise Your Watermelon’ t-shirts are the result of their collaboration, with 100% of proceeds going to the PCRF, a nonprofit humanitarian organization providing medical relief to children in the Middle East.

Why watermelons? In 1967 post-war, Palestinians were forbidden from raising their flag, so much so that artists could not even paint using the colours of the flag: red, green, black and white. They used slices of watermelons to symbolize “resistance, political unrest and a reminder of the power of creativity”, according to Dima Srouji. Available for men, women and children, the t-shirts feature artwork by Donna Hourani, where “the upward brush strokes of the flag colours are symbolic of the Palestinian movement towards freedom onwards and upwards”.

The ‘Raise Your Watermelon T’ is now available to shop on bykage.com.