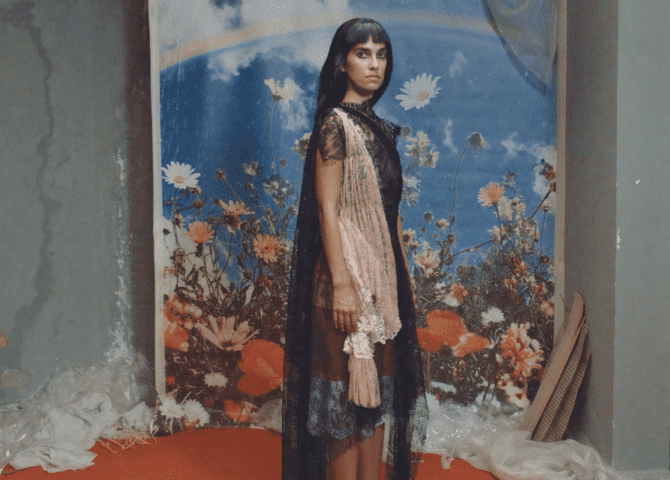 Hussein Bazaza looks to the Beirut blast for the collection's inspiration...

When the explosion rippled through the city of Beirut on August 4, the catastrophic explosion at the capital’s port left many homes and businesses in ruins, thousands of people homeless and Lebanese nationals around the world completely hopeless. It was a state of devastation that caused a range of emotions and this is what led to Hussein Bazaza’s latest collection.

The Lebanese designer, whom like many other creatives have been affect by the Beirut blast, looked to the fear, panic, anxiety, loss, love, hate and happiness (and plenty of other mixed feelings) for Spring/Summer ’21 — an artistic representation of what the country’s people emotionally go through on a daily basis.

The collection — dominated by pastel hues — featured tailored monochrome pieces that came with aesthetically-pleasing geometric cuts and raw pleating, as well as pieces that came handpainted with emotions expressed by the designer himself. Bazaza also had another approach to summer dressing as he used outerwear as a plea for protection against danger during these unprecedented times.

The collection was revealed during Milan Fashion Week through a fashion film that is as captivating as it is creative. Directed by Samir Siryani, the clothes are fronted by Zeina, a young woman auditioning for a role when she becomes confused when asked to tell us something about herself.