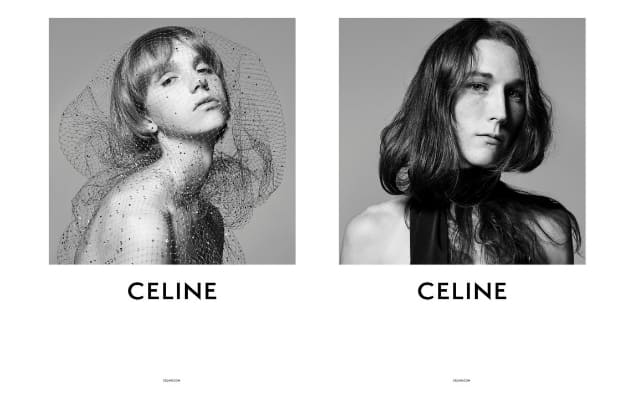 In the biggest hint yet of what we can expect at his show this month, Hedi Slimane has debuted his first campaign for Celine...

Hedi Slimane has finally begun to tease us with snippets of what Celine will look like under his leadership. Firstly, he debuted his first handbag design for the brand on none other than Lady Gaga, and then he announced a change in the logo to no longer included the accented e.

Now, the first images from his debut ad campaign for the French fashion house have been revealed. However, they still give away very little. In the images released so far, pictured are two models, one with what looks to be crystal-embellished netting around their head and the other sporting a scarf.

According to a release, the black and white portrait shots were taken in the brand’s atelier in Paris in June and the whole campaign features  “a cross section of a generation, comprising of young artists, musicians and models.”

Hedi was known for his strong rock’n’roll influence during his Saint Laurent days so could he bringing a similar energy to the once laidback Celine? Only two more weeks until we find out for sure.

Until then, find out what Giorgio Armani has planned for Milan Fashion Week.