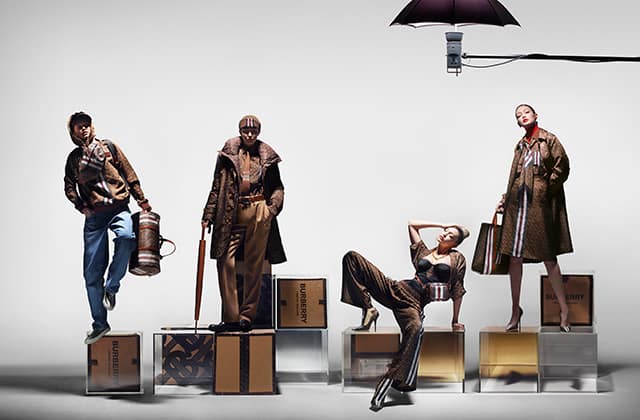 Gigi Hadid officially joins the Burberry family after making her runway debut at its Fall 2019 show...

It’s true. Gigi Hadid can literally rock any look. Case in point: the Palestinian-Dutch model has morphed into “the boy”, “the gentleman”, “the girl” and “the lady” — the four distinct characters that are celebrated by Burberry — for its new campaign.

Many were left wondering if the supermodel and British fashion house were working on something together after Gigi was spotted strutting the runway at Riccardo Tisci’s London Fashion Week show in February. However now, those inquiries were answered as she fronts a brand new campaign dedicated to the red-and-honey, Thomas Burberry-interlocked monogram collection.

“When I first started at Burberry, I spent a lot of time in the archives researching the rich history of the house,” explained Riccardo. “I quickly became very interested in Thomas Burberry and who he was not only as an inventor and innovator, but also who he was as a man, a husband and a father. When I saw an image of his initials, the design felt so special and actually very modern, so I quickly developed it into a new code for the house. It’s a symbol that not only embraces Burberry’s heritage but also feels very contemporary.”

Photographed by Nick Knight and styled by Katy England, the images show Hadid taking on the four different style types that make up Tisci’s Burberry customer. “What I wanted to do with the collection was to celebrate the breadth of who we speak to as a brand,” explained Riccardo.

Speaking of her debut campaign, Gigi said: ‘I have always loved and respected Riccardo’s work, and I feel so honoured and grateful that he trusted me with this project. My first Burberry show was my first time working with Riccardo, and the timing just felt perfect. It gave us our first opportunity to really get to know each other. The second I heard the creatives for this shoot, I understood how I wanted to bring that to life and show different sides of myself through each character. Nick, Katy, and Peter are all legends, masters at what they do; I cherish my time on set with them and I really wanted to give it my all – it was one of the most fun days I’ve ever had!”

The TB Monogram collection — comprised of ready-to-wear, accessories and lifestyle pieces (a yoga mat and towel included!) for men and women — will be available to purchase in selected Burberry stores globally and online from May 22, 2019.

Now, read more about Burberry’s decision to go plastic-free by 2025.