Not one, but two more reasons to get your credit cards ready...
April 9, 2018
Meeran Mekkaoui 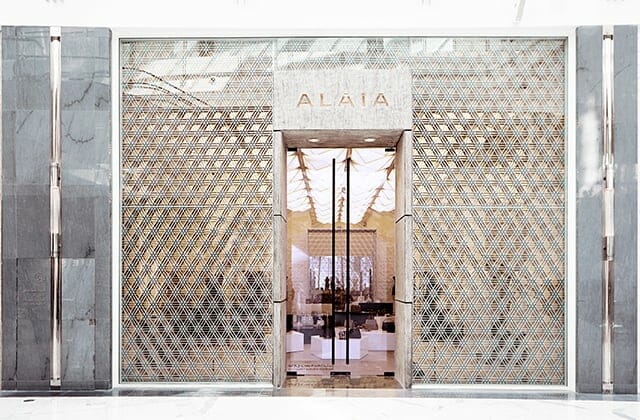 Courtesy of Boutique 1, two more labels have opened doors to beautifully created boutiques in The Dubai Mall's new extension. Take a look inside the stores now...

As a Middle Eastern consumer, there’s nothing we love more than shopping (plus, we’re actually really good at it). And now more than ever we’re spoiled for choice thanks to the multitude of new openings in The Dubai Mall‘s Fashion Avenue extension — many of which are the brand’s first flagship stores in the Middle East.

Now, two more names have just been added to the growing list…

In November 2017, the fashion industry lost one of its most incredible designers, Azzedine Alaïa, who passed away aged 77. Perhaps one of the industry’s most recognisable names, the Tunisian-Parisian couturier was credited with the creation of the body-con dress and now, the Middle East has a chance to get their hands on those beautiful creations.

The maison has officially opened its first standalone boutique in the region, and the space is absolutely breathtaking.

Perfectly blending Dubai’s heritage with modernity, the boutique embodies key elements the late designer would use during his creative process, whilst the space balances the play of light and shadow. The beautiful space will host the maison’s limited edition collections, as well as ready to wear, signature handbags, shoes and accessories of the season.

In a completely contrasted space against Alaïa, Missoni has implemented signature brand codes into its second boutique in the city.

Brought to life by a design concept developed by Angela Missoni herself and designer Patricia Urquiola, the 188m2 boutique follows the maison’s main language of intricate designs, bright colours and a play on tones and textures.

Alaïa and Missoni are now open to the public and are located in The Dubai Mall’s new Fashion Avenue extension.