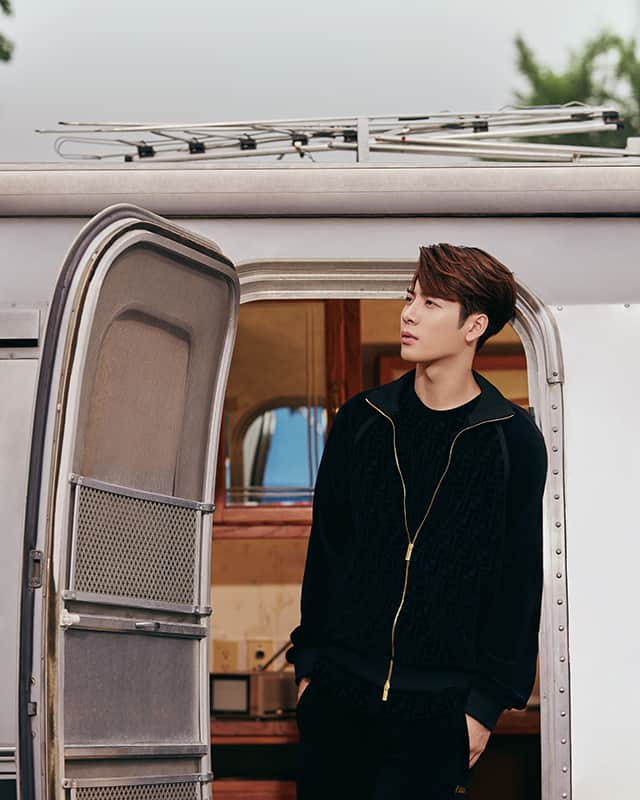 After Jackson Wang dropped his single 'Fendiman', it was only a matter of time before he got in front of the lens to front Fendi's latest capsule collection...

Fendi is synonymous with celebrity-filled campaigns, logomania and its iconic offerings (hello, Baguette bag), and the latest face to join its celebrity sphere is none other than Jackson Wang.

Appointing him as the brand’s newest face in China, the rapper’s impeccable style and achingly cool grunge ties in with the Fendi DNA and it’s only fitting that, not only is he the face of the brand but, he’s created a capsule collection alongside Silvia Venturini Fendi, to which he described was “such a good experience. I was very touched and very thankful that she let me think with no barriers.”

Titled Fendi X Jackson Wang, the coveted range breaks the boundaries between fashion and music as the iconic FF logo gets an entirely velvet makeover on a selection of ready-to-wear pieces, a Baguette bag (which just made its debut for Men), a clutch and a baseball hat, as well as running sneakers and slide sandals.

As for the inspiration behind the capsule collection? Wang exclusively said that the capsule collection is like “my vision of creating our own trend, with Silvia, we are trying to make something new. We don’t want to go back or get the reference from the past. So why don’t we create a whole collection, a first-ever velvet collection in the history of Fendi? We came up with this idea. And then, for the pattern, the design and the logo on each piece, we just focused more on “Less is more”. Nothing too crazy, we keep it simple, we want to bring out the inner beauty of the capsule. The first-ever velvet collection. All black.”

And all black it was as the hue was plastered across a formal suit, jumpers, t-shirts and trousers, too.

It actually came as no surprise that the Hong Kong rapper was announced as Fendi’s brand ambassador earlier this year.

Wang released a single titled Fendiman (an extremely catchy song) and even the music video was captured on the rooftop of Fendi’s Rome headquarters at Palazzo della Civiltà Italiana, known as the “Square Colosseum.”

So, to further celebrate the launch of the Fendi X Jackson Wang collection, the Italian fashion house launched a special and playful panda installation exclusively designed by the brand and artist Oscar Wang. The installation (which will stand at the entrance of Shamao Street at Chengdu IFS), also features the newest Fendi character, Fendidi.

Now, take a look at how Fendi paid homage to Karl Lagerfeld with its latest Haute Couture collection.