And the importance of bringing the two together
March 15, 2018
Maddison Glendinning 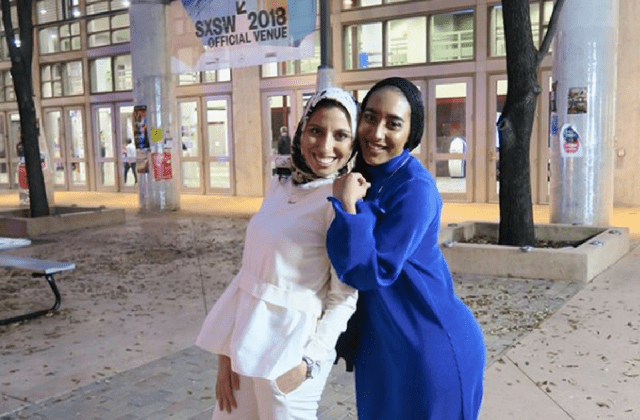 SXSW is on in Austin Texas this week and there was a particularly important panel discussion held by Mariah Idrissi and Melanie Elturk...

Buro 24/7 Middle East is spending the week in Austin, Texas to bring you the latest from SXSW, the city’s huge music, film and tech festival. This year’s festival included a style track and one of the panel sessions was run by Mariah Idrissi, the first hijabi model, and Melanie Elturk, the founder of Haute Hijab. Together, the pair discussed the importance of faith and fashion and how the two have come together — and to continue to do so in a much bigger way.

Here, we’re breaking down the pair’s best quotes around diversity, inclusivity and the importance of narrative.

Melanie Elturk on the struggle to find beautiful hijabs growing up

“Back in the day, we had two choices: black or white. And you couldn’t buy them from any store. Our parents went overseas and brought us back hijabs. It was a really difficult period for me as somebody who loved to express herself through fashion. It was really hard to observe this practice which I was really proud to do but do it in a way that made me feel beautiful and confident.”

“I was approached in a shopping centre by a casting agent asking to take a photo of me because she didn’t have any Muslim women on her roster. Then I got the H&M campaign, it was half a day’s work, and [once it was done] I completely forgot about it. Then it came out and my mum was like, ‘You’re on Google!’ [laughs].”

“It was about being able to provide access to something so simple but at the same time be a source of support for Muslim women who were also struggling, whether it was keeping it on or having the desire to put it on but needing that extra push. We really wanted to be able to highlight other women who wore it so that they could see through their own successes that the hijab wasn’t something that would hold them back.”

That’s when I started to realise we need more representation because there’s too many things that are happening for the first time that should have happened a very long time ago.
— mariah idrissi

Mariah Idrissi on realising the need for more Muslim models

“I got signed to Select Models and I was the first hijabi model to be signed to an agency and I thought that was actually bigger than being in the H&M campaign. That’s when I started to realise we need more representation because there’s too many things that are happening for the first time that should have happened a very long time ago. Even for young girls, you can imagine. So many young women didn’t think they could have a career in fashion, let alone be at the forefront of it, it’s something that’s still pretty rare to see and that for me is my motivation.”

“All Dolce & Gabbana needed to do was find one Muslim man or woman and show them the image and they would have said no, this doesn’t fly. It’s that narrative and that imagery that has to be authentic when you’re marketing to this demographic because let’s not forget that our headscarf is still rooted in faith so if you don’t understand the basics, you’re going to miss the mark. So instead of being something revolutionary, it became clear that it was just a money grab.”

“I was very aware that I was definitely being used as the token Muslim girl in the [H&M] campaign but I thought rather than complaining about it and not being a part of it, I’d rather use the platform to actually do something positive by adding a lot more substance to the industry as a whole. I feel like it’s important that I use my voice as much as my face.”

Melanie Elturk on the appropriation of the headscarf in fashion

“I would prefer to that you see it [even when it’s been appropriated] then not see it at all because what ends up happening is that these designers are helping the Muslim community be seen and they’re helping women like me, who walk around every single day wearing the hijab, to look more recognisable, and normalised.

We really wanted to be able to highlight other women who wore it so that they could see through their own successes that the hijab wasn’t something that would hold them back.
— melanie elturk

“Although H&M opened the door for me, when my agent called them after the campaign to see what else we could work on in the future together we were told, ‘We’ll call you when it’s relevant.’ And I thought, ‘OK, so does being a Muslim woman in a hijab mean we’re not relevant all the time?’ DKNY for example, they have certain times of the year where they know that they monetise off us but for the rest of the year, they stick to the girls they have. Similar to Dolce & Gabbana. This is where the area of cultural appropriation comes in. My opinion on it is that, if you’re going to take something from a culture and you know that you’re going to make money from it without actually serving the people that you’re taking it off, without even an understanding of where it came from, that’s where the line becomes very fragile.”

“Because the [modest fashion] industry is in its infancy, it means everyone comes together. Right now we informally have our own little council all on one big WhatsApp group. The Modist is on there, every modest fashion player is, and we’re all collaborating and applauding each other. We’re there for each other because the strength is in numbers and we’re all in this together.”

Mariah Idrissi on having options for everyone

Now, see what Karlie Kloss had to say at SXSW about the need for more women and girls to be included in STEM fields.