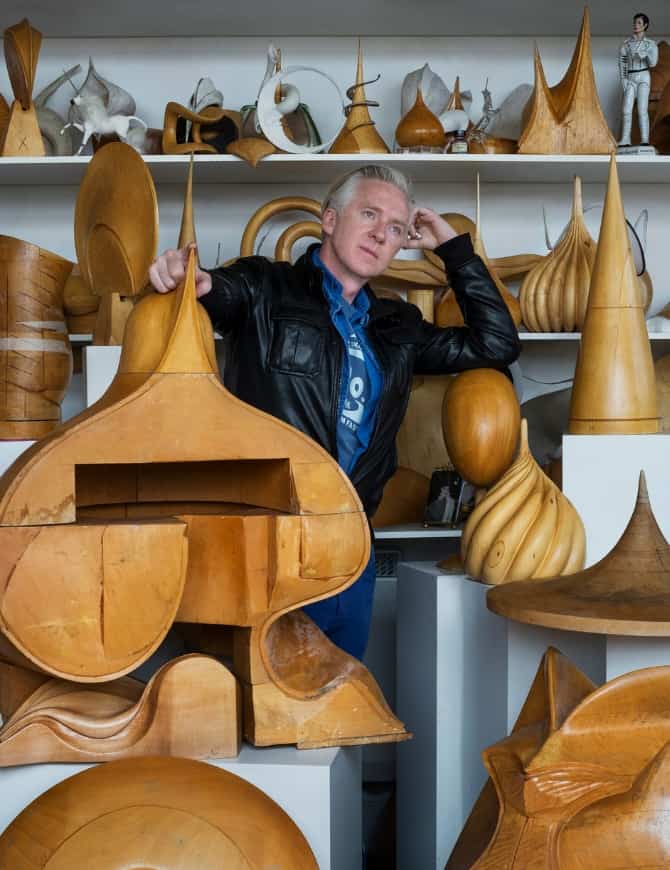 The name Philip Treacy will undoubtedly be familiar to any royal watcher, and with good reason — he is the man responsible for almost every hat spotted on the likes of the Duchess of Cambridge and the Duchess of Sussex at official occasions. Here, the designer chats with Buro. Middle East contributor Farouk Chekoufi about his career and how the royals have kept hats alive...

What made you want to become a hat designer?

I moved to Dublin to study fashion at the National College of Art & Design, where I made hats “as a hobby” to go with outfits I designed on the course. Nobody really had much time for the hat because it was a fashion school, but there did come a point when I was more interested in making the hats than the outfits. When the students had to arrange work experience, I chose to spend six weeks with Stephen Jones, the London hat designer.

After graduating from The National College of Art & Design I won a place on the MA fashion design course at the Royal College of Art in London. When I was interviewed I didn’t know whether to play down the hats or play up the hats, but they were thinking of setting up a hat course so I became their guinea pig. After one day there I said to my tutor Sheilagh Brown, ‘What should I do? Should I make hats or clothes?’ She said, ‘Make hats.’ It was very practical, not a great revelation.

What has changed the most since you’ve been designing?

Hat making has been around since the beginning of time; it’s part of every culture. I haven’t invented the hat; I have just sort of made them sexy.

Who is the Philip Treacy woman?

Our customers are everyone from a young girl who’s saved up for a Dhs700 rainwear trilby to this very distinguished gentleman of about 70. He comes in every summer to order 20 Couture hats to entertain those who will be staying on his yacht. It doesn’t matter how much people pay for them: everyone wants to look a million dollars in a hat.

Do you have a favourite piece from your career?

I was summoned to Paris to meet Karl Lagerfeld, chief designer at Chanel. I was 23 and I’d just left school, I didn’t know whether to call him Mr Lagerfeld or whatever. I was totally intimidated but Issie [Isabella Blow] was exactly herself. She just walked into the house of Chanel and said, ‘We’d like some tea please.’ I went on to design hats for Lagerfeld at Chanel for ten years. The first hat I designed was the twisted birdcage, photographed by Patrick Demarchelier and worn on the cover of British Vogue by Linda Evangelista.

What is the ultimate signature style of Philip Treacy?

I design hats to enhance the face in a particular way whether an angled brim sweeping upwards or an elegant flat brim.

What is the best part of your job?

I have an opportunity to influence how people see hats in the twenty-first century. And that is a very exciting job, because I have a worldwide audience open to seeing hats in a new way.

Your favourite star ever?

I think Marlene Dietrich was incredibly glamourous. I bought a picture of her for the G hotel with her signature, she had also written, ‘Glamour is my stock and trade’. It couldn’t be truer!

The purpose [of a hat] is to enhance the features of the face. It’s also a cheaper alternative to cosmetic surgery!

Who is your inspiration and style icon?

Isabella Blow wore couture challenging hats. I was so inspired by how she wore my hats. She wore them like she was not wearing them — like they happened to be there to entertain herself and whoever came in contact with her. She understood the romance of wearing a hat and saw them as entertainment and symbols of elegance and beauty. She felt empowered by a hat.

You dress so many celebrities today around the world and for the red carpet. Is there anyone in particular that you particularly enjoy creating for?

The British Royal Family have kept hat wearing alive in the imagination of people all over the world.

Is there a particular era in fashion you like?

People always ask me if I would have preferred to live in a more ‘hat’ era, such as the ’20s or ’40s, but I think it is much more exciting to work today. I use contemporary influences, be it sculpture, or art, or whatever is going in the world today.

What about the process of sketching a design of a hat?

The hat starts off as a drawing, I will make a prototype in a light flexible material called Sparteries, this goes to the block maker in Paris to be carved in wood or to be mauled in metal. There are two different processes for making a hat, by hand on a wooden mould which can take up to three days for one person to make the shape without being trimmed, or on a metal block when the shape can be stamped out in minutes. All the hats are then hand stitched, trimmed and hand finished in our London studio by highly skilled milliners. Many of the processes of the hat making have remained unchanged for hundreds of years.

How long does a hat take to make?

From one day to one month to a year depending on the hat.

Do you think hats will always be bigger in the UK?

It’s part of English dress and culture, but we have an international audience who are seduced by glamour, and glamour is and will always be attractive to men and women. So glamour is a sort of a good currency to work in and there is nothing more glamorous than a hat.

Do hats suit everyone?

Hats are meant to be for everyone. It’s a very potent part of the body to decorate because, when you meet people for the first time, you are not meeting their foot or their hand or their hip, you are meeting their face. The purpose is to enhance the features of the face. It’s also a cheaper alternative to cosmetic surgery!

Now, find out how much of an impact the Duchess of Sussex had on fashion searches this year.