In conversation with the designer
April 13, 2018
Meeran Mekkaoui 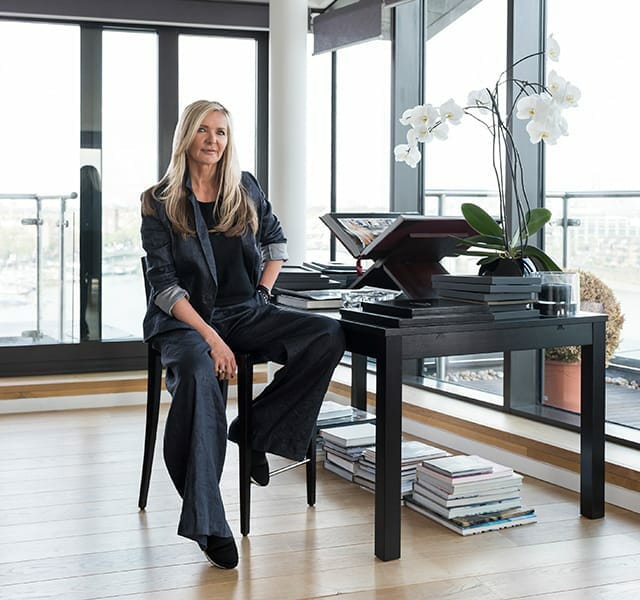 Just two months after presenting her Fall/Winter '18 collection in London, Amanda Wakeley has jet-setted to the region to give her Middle Eastern clientele a close-up preview of the collection...

With some of the world’s biggest names such as Beyoncé to members of the British royal family including Meghan Markle, Kate Middleton and the late Princess Diana on her client list, Amanda Wakeley OBE is clearly a force to be reckoned with.

After showcasing a beautiful Fall/Winter ’18 collection in London two months ago, the British fashion designer made her way back to the Middle East (it’s been three years since her last visit) to highlight key pieces in the range and to give a sneak peek of her newly launched eyewear collection.

Welcome back to Dubai! What was the inspiration for your Fall/Winter ’18 collection?

Thank you! So it’s very much glam rock from the Seventies and there was a real hidden glamour that was coming through and I was inspired by that era. We develop all of our own prints so it was really exclusive to us and for winter I really talked about the women who are kind of like a “midnight moth” so she would wear some of the evening pieces during the day, and vague pieces during the evening. The way she puts it together, the way she throws her jewellery on and just goes… She just has a real effortless chic about her.

Some of the pieces are quite modest too…

I think there’s something so feminine about it that it felt very right to have sleeves. The sleeves might be slightly sheer, but it does feel right.

I think we’ve entered a modest time in fashion and I love it!

Do you think that because the collection features modest wear, that it has helped your collections resonate more with the Middle Eastern clientele?

I think it certainly does but I also think it’s a global shift and it’s one that I embrace.

How would you describe the Amanda Wakeley woman and what does she look for in your designs?

When I think about the Wakeley woman, I see her as a multi-tasker, a woman on the go who wants to look effortlessly chic. She doesn’t want to look like she’s tried too hard, and so I always say that we try to do all of that thinking in the design studios so that as you put it on, it’s easy, effortless and you can literally just add a belt, tie it up and go.

Speaking of accessories, you’re launching eyewear. Why did you decide it was important to branch out and include sunglasses in your collections?

It felt like an obvious next step. I think the way we accessories really can complete a look. So we’ve had great success with our jewellery, all of the chunky gold chains, silver chains. So, sunglasses felt like an obvious step. We’ve taken what I call the hardware assets of the bags and applied it to the arms of the sunglasses. It’s just the tiny, tiny little details. The Middle Eastern woman is a very educated, informed customer and so she loves all of those little details as much as I love designing them.

Have you seen a difference in Middle Eastern fashion since visiting three years ago?

Yes! What I love being about the Middle East is that Middle Eastern women really embrace fashion and dressing up.

they embrace life and I love that spirit and to me, that’s very much a Wakeley woman.

When you first started your eponymous label, was there a certain gap in the market you were looking to fill?

Yes, there was. I had moved back [to London] from America in the late Eighties and there wasn’t that gorgeous clean, glam, luxury sportswear so readily available. I mean now, everything is available to everyone around the world via Internet but that really inspired me. To this day, I love that ease and that sports luxe approach to dressing.

You’ve dressed everyone from Princess Diana to Beyoncé and Kate Middleton. Who else would you like to dress next?

Do you know what? It’s so funny because I so often get asked that question. For me, I get my biggest buzz from seeing someone walk out of a fitting room and walking an inch taller, shoulders back and feeling so empowered and transformed by my clothes. So for me, that’s where I get my real buzz. Don’t get me wrong, it’s a wonderful privilege and a wonderful endorsement when someone carries my profile and wears something, but seeing women transform is really great.

Speaking about women feeling empowered, you’re an advocate for humanitarian organisations that provide services to women. Why is female empowerment something so important to you?

Yes. You know, I’m a woman who has worked for all of my life. I think it’s wonderful that women are speaking up, but one thing I would hate to hear is that women have been given opportunities that they haven’t earned because I feel that we have earned them. When it comes to quotas on diversity, whether it’s gender or whatever, that feels wrong because we’ve earned it.

Who is your ultimate muse?

Ooh! I think that the one I probably come back to the most would be Lauren Hunt. There is just an essence of the way she dresses. I think her approach to life and dressing is what I love. It’s her spirit.

What else is coming up for the brand this year?

So for the next year, we’re doing a big focus on digital because that’s just the direction now. And then, it’s to find the next strategic partner and it would be wonderful to find the right partner here in the Middle East. You know you don’t come to a market like this on your own. You need a really strong local partner so right now, it’s about finding a partner that has the same values as we do. For us, it’s so important to have great service, really kind people and real honesty with our customers.

Amanda Wakeley’s Fall ’18 collection will be available online and at Maison BMore in Mall of the Emirates from July, and the full Fall/Winter ’18 collection from September.

Now, see which British royal was recently spotted dressed in one of Amanda’s beautiful dresses.