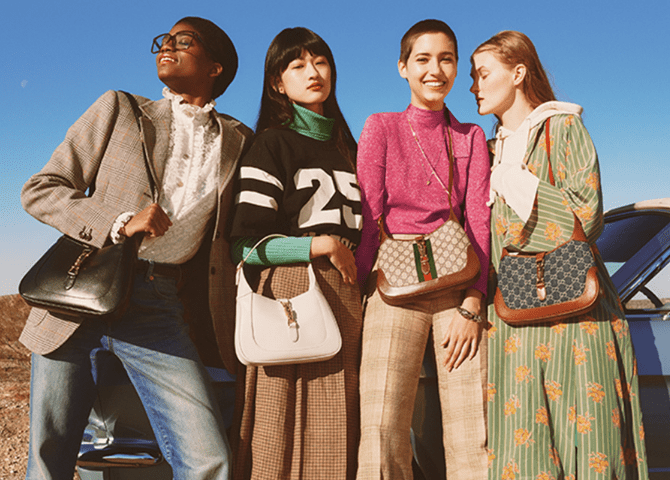 Gorgeous, groovy, and oh so Gucci – the new Ouverture campaign brings nostalgia and its latest offerings to the forefront...

When you dive deep into the wild world of Gucci‘s Alessandro Michele, you never know what you’re going to get. You may come across neo-Romantic styles, exotic birds, spirit animals, a time machine or overall, just his signature far-fetched fantasy that we’ve all come to know and love.His latest collection is an example of just that. In 2020, after announcing that Gucci will show just twice a year moving forward, the designer introduced ‘Ouverture Of Something That Never Ended’— the 7 part mini-series by him and Gus Van Sant that presented the new collection in November 2020.Originally captured in Rome, the campaign is revisited in the Golden State of California, offering a nostalgic lens into the collection.

Featuring an eclectic group of well-dressed friends around Los Angeles, the stars of the campaign are captured out and about on the city’s sandy beaches and overlooking twinkling cityscapes. Their final destination is a drive-in cinema, where ‘Ouverture Of Something That Never Ended’ is being screened, closing the circle with this film-within-a-film.

The collection eliminated the distinction between menswear and womenswear, and the past and present. It also featured a little retro nostalgia, exclusive re-editions and the exploration of humans and the universe.