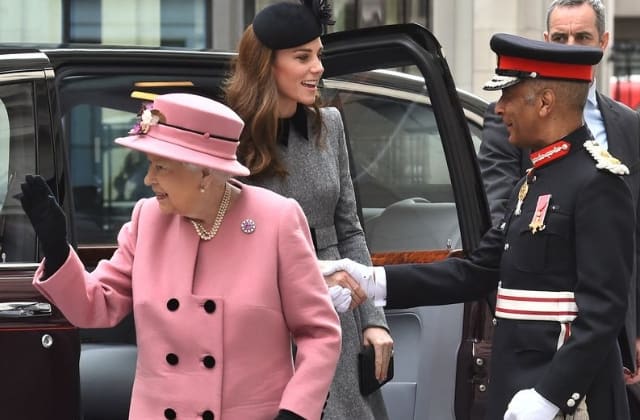 Queen Elizabeth II and Kate Middleton stepped out together in a rare joint appearance at King's College London...

Every member of the royal family is always booked up with public engagements. Just take a look at how many places and things the Duchess of Cambridge has done in the last few weeks alone. And usually, each member carries out their own agenda individually or in a couple, depending on what the occasion calls for.

But today, something else happened. Kate Middleton and Queen Elizabeth II stepped out in a rare joint appearance at King’s College London. The last time the two had a joint engagement was in March 2012, when Middleton was still in her first year of marriage to Prince William – we suppose the Queen was helping and easing her into her official line of duties – because, what else is a grandmother-in-law for, right?

Of course, Middleton donned yet another stylish, praise-worthy outfit. She wore a neutral, grey Catherine Walker belted dress with a black fascinator. And age has definitely not waned The Queen’s fashion proclivities, as she was dressed in colourful contrast in light pink coat and matching hat.

So, the two women opened Bush House at King’s College, the latest education and learning facilities on the Strand Campus, after which the pair went off in their separate ways.