Off to another celebration!
May 19, 2018
Maddison Glendinning 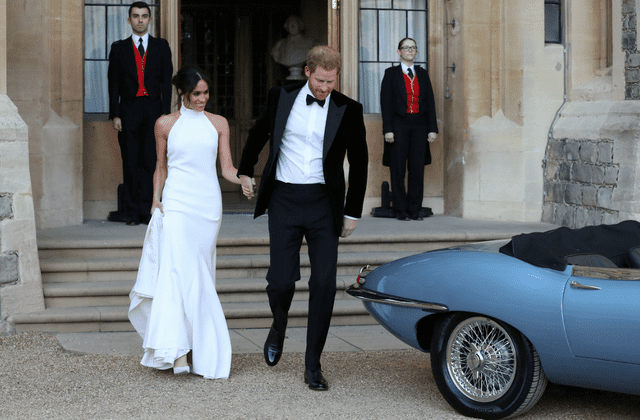 The wedding of the year took place today and the festivities are still taking place in the UK...

What a day it has been. Meghan Markle has finally married Prince Harry in scenes directly out of a Disney movie script. Surrounded by 600 guests, including several A-list celebrities like George and Amal Clooney and Oprah to name a few, the pair wed in St George’s Chapel, officially becoming the Duke and Duchess of Sussex upon doing so.

Meghan wore a beautiful white dress designed by Givenchy’s first female Artistic Director Clare Waight Keller for the ceremony and the pair’s carriage ride through town, but has since changed into another stunning gown for the evening reception being hosted by Prince Charles at Frogmore House.

The pair has just been snapped leaving Windsor Castle, looking seriously chic as husband and wife. Meghan has opted for a long white high-neck gown by British designer Stella McCartney for the occasion, whilst Harry has changed into a dapper suit for the next portion of the festivities. Meghan was also sporting a giant aquamaring ring that once belonged to Princess Diana in a touching tribute to Harry’s late mother, Princess Diana.

They left the castle in a blue Jaguar E-Type Concept Zero, driven by the groom, but not before giving the waiting crowd a quick wave.

See the dress and departure below…

The Duke and Duchess of Sussex depart Windsor Castle for a reception hosted by The Prince of Wales at Frogmore House, in a silver blue Jaguar E-Type Concept Zero. This vehicle was originally manufactured in 1968, and has since been converted to electric power #RoyalWedding pic.twitter.com/hRrxEUlFlJ

Then, find out more details about Meghan’s Givenchy gown and how her five-metre long veil paid tribute to the Commonwealth.