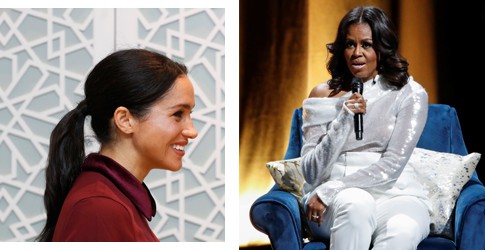 In what might be one of the coolest hangs to have happened this year, three of the world’s most influential women got together this week...

This week, Michelle Obama is in London to promote her new autobiography, Becoming and on Monday evening, she was joined by two rather special guests at her latest appearance.

Famed feminist author Chimamanda Ngozi Adichie (whose works have recently been translated into Arabic for the first time) accompanied the former First Lady on stage at London’s South Bank Centre for an hour long conversation about life and lessons they had learnt along the way.

Once the talk was over, the Duchess of Sussex who was at the event “privately” (as Omid Scobie reports as having been confirmed by Kensington Palace) met Michelle for the first time. Can you even imagine?

The pair reportedly enjoyed a lengthy conversation which no doubt would have included all manner of amazing advice and subjects. In fact, Michelle recently gave Meghan advice in an interview with Good Housekeeping, saying, “Like me, Meghan probably never dreamed that she’d have a life like this, and the pressure—from yourself and from others—can sometimes feel like a lot. So my biggest advice would be to take some time and don’t be in a hurry to do anything.”

We’ll forgive them for forgetting to invite us to this private pow wow this time around.

Now, see which global music acts are headed to Saudi Arabia this month to perform.