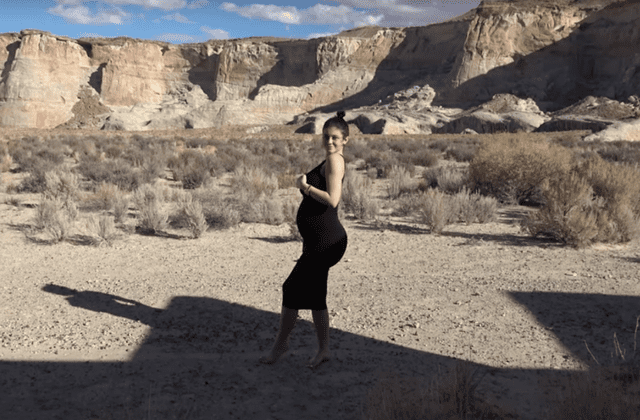 It's been the Kardashian/Jenner family's worst-kept secret and Kylie Jenner has finally confirmed she has given birth in a heartwarming video. See it below...

For months, speculation has been rife that Kylie Jenner, the youngest of the Kardashian/Jenner family, was pregnant. Kylie has not been seen in public for at least six months, and seriously scaled back her social media presence in that time also. When asked about it, family members, including Khloe Kardashian who is also pregnant with her first child, awkwardly dodged questions leaving many to wonder when the big reveal would come.

It finally did overnight.

Kylie released a video to her fans that already has almost 15 million views and it was only uploaded seven hours ago. Titled, ‘To Our Daughter’, the video features Kylie’s friends and family talking about the moment they found out, what the journey has been like and what kind of a mum Kylie will make (it’s unanimous that she’ll be great). There’s also footage inside her baby shower, as well as her check-ups where she and partner Travis Scott see the baby and hear its heartbeat for the first time.

The 11-minute long clip also features a surprise cameo from none other than Kim and Kanye’s newest addition, Chicago West, who was born just one month ahead of Kylie’s baby. At the end of the video, it was revealed that she and Travis welcomed their healthy baby girl on February 1.

Today, the family’s social media accounts have all featured messages of support for Kylie, including a repost of Kylie’s own message to fans which read, “I’m sorry for keeping you in the dark through all the assumptions. I understand you’re used to me bringing you along on all my journeys. My pregnancy was one I chose not to do in front of the world. I knew for myself I needed to prepare for this role of a lifetime in the most positive, stress free and healthy way I knew how. I knew my baby would feel every stress and every emotion so I chose to do it this way for my little life and our happiness.”

See the video below…

Congratulations to Kylie and Travis!

Now, find out more about E!‘s newest TV show that’s set to be your latest obsession.