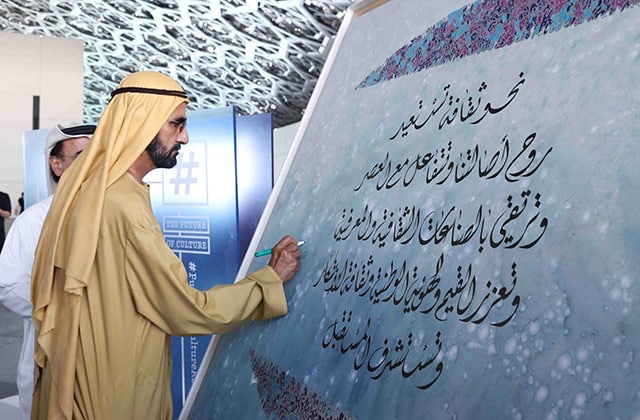 Sheikh Mohammed has launched a new initiative to help the country better understand its cultural heritage. Find out more here...

The cultural scene in Dubai is already booming with a slew of exciting experiences and with more projects in the works, there’s no doubt the city will continue to receive worldwide recognition for its cultural developments.

Whilst the country is growing at a quick speed, it’s important to look back to its roots and know more about where it come from — a concept that is deeply understood and put to work by HH Sheikh Mohammed bin Rashid Al Maktoum.

The Vice President of the UAE and ruler of Dubai launched a new initiative earlier this week, titled the UAE Cultural Development Fund, to celebrate the unique cultural scene of the UAE.

The fund aims to support people and organisations that are strongly promoting the UAE’s heritage and language and will be overseen by the Ministry of Knowledge and Culture Development.

The member of the Dubai royal family (who recently attended his daughter’s wedding) was spotted at the Future of Culture retreat at the Louvre Abu Dhabi to discuss the new initiative.

“The UAE’s drive towards leadership of the future, and its pursuit to be among the most advanced countries in the world won’t be realised unless we enhance our cultural heritage. The future of our cultural development should be based on creativity and innovation. Economy, culture and politics are components that interact to create a nation, and build a state. The development of our country depends on a well-established and forward-looking culture,” His Highness said of the intiative.

Whilst no further details have been released, stay connected to Buro 24/7 Middle East. In the meantime, find out which member of the royal family officially welcomed a healthy baby girl earlier this week.