On our calendar this weekend: Dubai’s Arabic Indie Music Festival 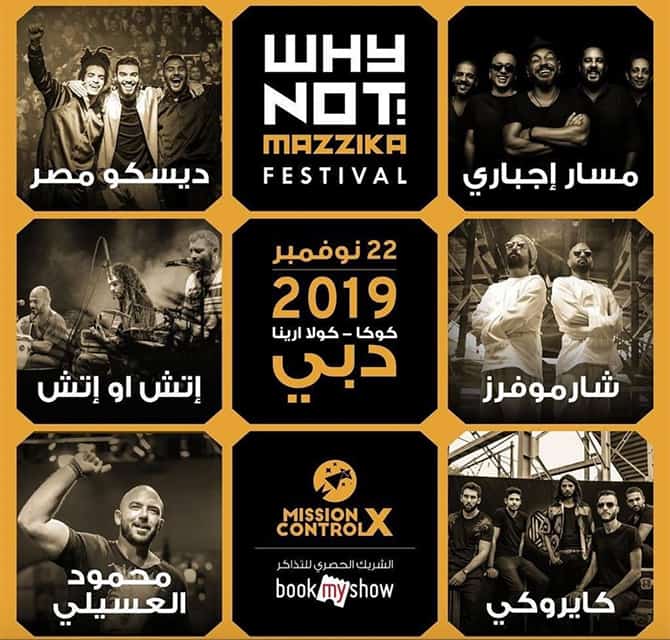 As far as music festivals go, Why Not! Mazzika Festival’s debut edition taking place on Friday November 22nd in Dubai’s Coca-Cola Arena is a relatively intimate affair. With Cairokee, Sharmoofers and Massar Egbari headlining, the the first-ever Arabic language live music show promises some of the region’s leading independent musicians, not to mention a good smattering of star up-and-comers: alternative rock band H.O.H, and Disco Misr.

With 452k followers on Instagram and over 1 million views on certain YouTube tracks, Egyptian reggae-infused rock band (made up of Bob and Moe) will lead the festival with their popular groovy music. The duo, who just came out of a stellar performance at the opening of AFCON Under 23 Opening Ceremony, will be playing some of their most popular hits, including Khamsa Santy and Sharmoofet.

They’ll be joined by another of Egypt’s biggest acts, Cairokee, who rose to fame back in 2011 with their protest anthem, Sout El Horeya, which was made popular during the Egyptian Revolution. DJs Amr Emad, Mustafa Al Sherif and Schady Wasfy, who make up Disco Misr, are another act to watch out for. The trio, considered one of Cairo’s most sought-after musicians, will inject the festival with their take on Arabic pop; expect deep house, nu-disco and punk infused tracks to dance to all night long.