If you're looking for something exciting to do this weekend, the In Bloom exhibition needs to be on top of your lists...

eet Laura Laine, the award-winning Finnish fashion illustrator that is attracting attention around the globe thanks to her whimsical illustrations and unbridled creativity. Currently in town for her first major solo exhibition in the Middle East, Laine exclusively created a series of artworks for the In Bloom showcase and ahead of its official opening, Buro. Middle East caught up with the artist for a quick chat on why Dubai seemed like a natural choice for her first exhibition in the region, where her inspirations stem from and why her muses are almost always women…

Welcome to Dubai! We’re in town for your first exhibition in the Middle East, In Bloom. What can we expect to see?

Thank you! Well, there’s a total of 10 pieces creating specifically for this exhibition in Dubai. Over the course of the past year and a half, I would say, we [Laine and Annuska Arponen, the curator of the exhibition] were discussing this idea already and this was always sort of a dream project. Finally, everything came together and it’s been a long time coming but I’m finally really happy to see everything come together.

Why did Dubai seem like a natural choice for launching your first exhibition in the Middle East?

Well, of course, I’ve had this connection with Annuska and we had met years ago when she was buying my work. So we became friends like that and in a way, that felt natural. If you see my work and if you look back at it from years and years ago, I’ve always been drawn to this orientalism and decorative, opulent elements. Not very Scandinavian! (laughs). So for me, it was a very natural environment and the aesthetics of everything here feels very much inspiring and it’s something I would draw from naturally. I’ve spent a lot of time in India actually and it’s sort of another region where my fascination with things decorative comes from.

You obviously have a very distinct style when it comes to your works. How would you describe your style in terms of your art?

I’m interested in depicting females and sides of women. In a way, there are also maybe sides of myself. But it’s mostly the feminine form and female themes that inspire me. I’ve always been interested in fashion as a source of inspiration and it’s sort of a big part of the work I do in each piece. There’s this element that is present very strongly. I’m also interested in things that are not so easy or so traditional and regarded as harmonious. It’s also interesting because when people look at my work, they see different things. Some see that they all look angry or depressed, but then others say that she looks very strong. There’s always the reflection of the viewer but some kind of contradiction or un-easiness is something that I’m interested in depicting in my characters.

You focus on a lot of textures in your works, too…

Yes (laughs). I really enjoy just the act of drawing and it’s sort of very detailed. Originally, I think, if you look at my works it’s always very prominent. Not always, but in most of the works. And I sort of like to keep the body proportions in a way, natural. They are distorted but there is a sense of a real body. But with the hair, you can really play with it and use it as this voluminous element in the composition. So for me, it’s mostly about the composition.

Can you talk us through your creative process…

So these pieces, I would say, would take a couple of weeks for one. Depends on how much time I have. I like to just take my time with a piece and just really enjoy the act of drawing. It’s what I really like. I usually start by just collecting image materials and I have a lot. I see which ones talk to me and what I find inspiring.

Are the materials photographs, cut-outs from magazines or paintings?

Yes! Just sort of everything and I place them in image banks on my computer. It’s just whatever I find inspiring and then I just go from there. So it’s kind of a very normal process I suppose (laughs). I use elements from different photos and just change them and I don’t really sketch much and I start from a corner and just sort of let it come on its own.

How did this all begin for you?

It sort of happened very naturally. I was studying Fashion Design originally but before that, I was always in art school. My parents are both fine artists as well, so it was something that was very much encouraged in our family. I just started to study fashion because I was 18 and not really sure what I wanted to do. But the university that I got into was a really good university in Finland and during my studies, I realised that I wasn’t really into designing and creating three-dimensional pieces. I was always interested in drawing and it was kind of where I found this fashion illustration field. Then, I started to get some client work when I was studying and I got a lot of works published, just kind of immediately on its own. Once I graduated, I put up a portfolio and I started to work, pretty much, full-time since then.

And in your opinion, how do you think fashion and art go hand in hand?

There are a lot of creative brands that are doing objects that you’re not sure are either art or design. It’s not such a relevant question anymore. It’s kind of a perfect way to think about art and fashion. I would say that from a design perspective, there are a lot of interesting brands nowadays. There’s a British brand, Craig Green, his collections are almost like sculptures. He has incredible ad campaigns and you’re not really sure if it’s anything wearable but it’s very expressive. It’s art! I see it that way.

I think there is really no border between fashion and art. Nowadays, I can see that the trend is towards actually blurring the lines between art and design, in general.

You touched upon the word trend. Have you noticed any fashion trends here in Dubai since you’ve been here?

Hmm. I think everything is so global and open here. It’s difficult to even say where you are at times. Every city would start to look the same in trends. At some point, when I was younger, Helsinki was always secluded and trends came two years after. Nowadays, everything is going so fast with Instagram and things spread around. However, compared to Finland, I think women here pay attention to how they dress up, how they look and how they put on makeup and their hair. That’s always something that is really interesting for me because, in Finland, we’re sort of an example of super low-key. It’s kind of trendy to not wear make-up at all and that’s why I always enjoy coming to places where people love putting on make-up and expressing themselves in that way.

What were some of the challenges you faced as an artist?

Well, when I do client work, that’s never simple. It’s always about compromises. When I started, that was probably the most difficult time because no one told me how to do it and nobody told me what to expect. To understand how to really work with clients, that was something that came slowly. Then, there would be some problems. My style and the way I draw is very detailed and it takes a lot of time and so, it’s not like fashion illustration where it can be very quick and what I do, is not. So making changes, making adaptions and changing my aesthetic to something that the client likes, that’s sort of something that took some time to learn.

You’ve touched upon your style. How would you describe it?

I don’t know! It’s really tough (laughs). I think I am the worst person to describe my works. Of course, there’s an element of mysterious and authentic. 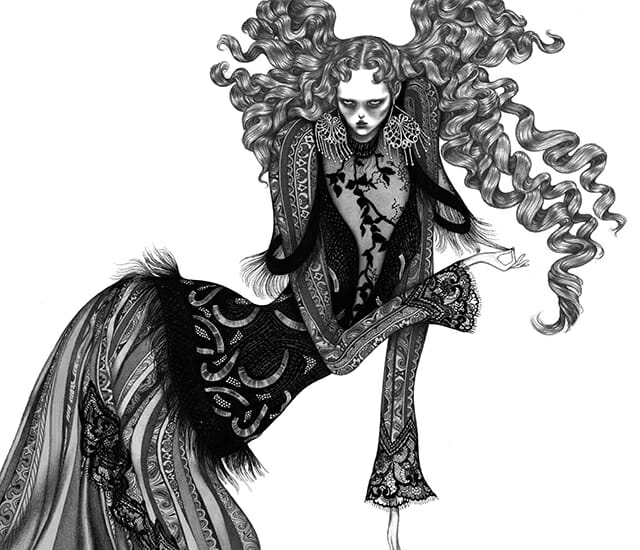 And they don’t really have a lot of colour. Do you think it’s something you would incorporate into your works later on?

Actually, nowadays, I’m doing more coloured work than I used to. When I was started, I was strictly just black and white. That was also really difficult as well because clients would want colour. The black and white just came because I really enjoy pencils and I felt that black and white was a great way to really focus on the texture and shapes, and those were elements that really interested me in images. When you bring in colour, it’s another problem to solve so I felt that I really wanted to just pay attention and focus on the textures. I’m slowly starting to feel more comfortable with colour myself but it takes some learning.

How about a direction in animations?

I just did my first animation project actually. I created, together with three other people, two animators and one sound designer, on a six-minute animation and I really enjoyed it! So definitely it’s something that I’m very interested in exploring.

What advice would you give to an emerging artist?

I don’t think there’s one right way to do things. I think people are so pressured these days to do something a certain way and to make their art, or themselves seem a certain way. When I speak to different artists, they all had different ways of how they came to what they’re doing. Even if you look at art history in the past, they all have very different backgrounds. I think that everybody has their own path and everybody should feel what feels right for them.

Laura Laine’s In Bloom exhibition will run until November 3, 2018, at the Courtyard Gallery, Dubai.

Now, take a look at other cultural events happening around the city during the month of November.