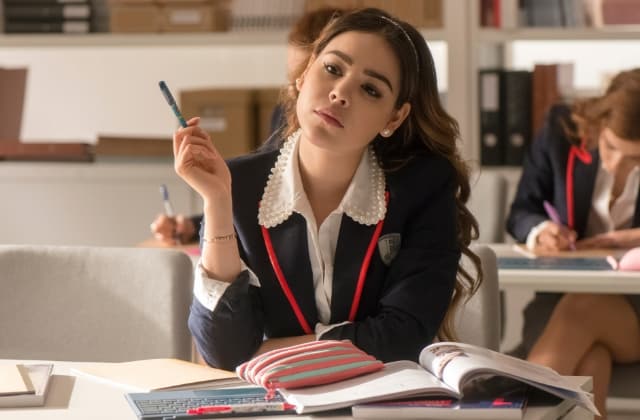 Netflix has just released its October schedule and it looks like we're in for a pretty good month of viewing...

Netflix has just announced the shows coming to the platform for October and it looks like we’ll have plenty of reasons to stay in. Here’s what you can’t miss this month…

A Spanish teenage drama, ÉLITE is being compared to Gossip Girl for the new generation and it’s not hard to see why. Set  in Las Encinas, the most exclusive school in Spain, the storyline follows a battle between the haves and have nots (Blair/Chuck, Dan/Vanessa, anyone?) that ultimately ends in murder. From the drama to the pearl encrusted collars and the headbands, we’re totally in for the ride on this one.

ÉLITE will air on October 5.

2. The Chilling Adventures of Sabrina

We’ve been counting down the days until we could watch the 2018 version of Sabrina The Teenage Witch and we’ll be able to do so this month. However, the new series is nothing like the original. As its title suggests, the reboot (which stars Kiernan Shipka as Sabrina) focuses more heavily on the supernatural and the occult and promises to be seriously spooky. Salem is back, too, although he’s been upgraded from a robot to a real cat this time around.

The Chilling Adventures of Sabrina will air on October 26.

Finally, Dynasty is returning after a jawdropping series one finale. The second season will pick up from the catastrophic events in the final episode of last season and follow the Carrington family as they rebuild their lives and legacy. We’ve been missing our weekly dose of Fallon swanning about in Gucci and seeing as Fashion Week is almost over, we’ll be well and truly ready for some new sartorial inspo.

Dynasty season 2 will air on October 13.

If you’ve been counting down the days until the second installment of Making A Murderer you’ll be thrilled to know that part two is coming to Netflix this month. The series will continue to follow Steven Avery and Brendan Dassey as they fight to be freed from jail after being convicted of a murder they continue to maintain their innocence of. Clear a weekend, you know that once you start, you won’t be able to stop.

Making A Murderer: Part 2 will air on October 19.

Jessica Biel was nominated for Outstanding Actress in a Drama Series at this year’s Emmy Awards for her lead role in The Sinner and this month you’ll be able to see what all of the hype is about. The series follows a murder investigation after a young mother stabs a complete stranger, seemingly out of nowhere. Gripping and packed with suspense, you won’t want to press pause.

The Sinner will air on October 5.

Now, read our culture guide for the month of October.