Why are we so nostalgic for the early noughties? 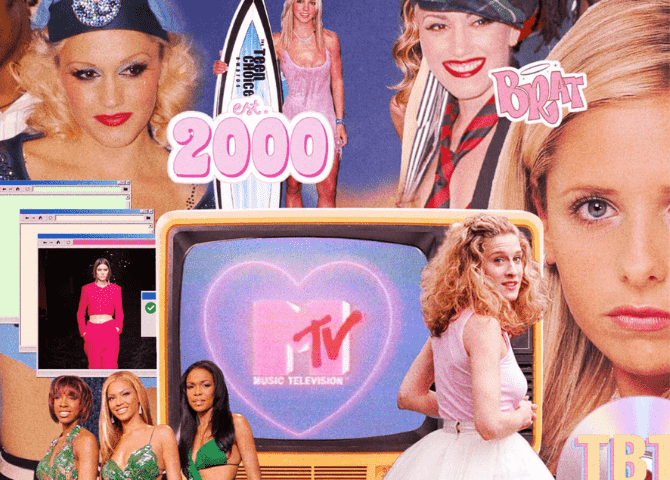 If the past was a person, they would be cast as the charming – yet unreliable – friend. On a good day? An antidote to misery. On a bad? The cause of immovable melancholy. Take, for instance, our phones. Which have transformed into passports in the last year (in lieu of actual travel). Oh, to see and be seen! A comfort for some, but galling for most who are desperate to experience new experiences, rather than to be sad faced, scrolling through old ones. But, scratch the surface long enough, and the fetishisation of bygone eras is actually deeply telling, a clue to our hopeful stumbling motions towards an ambiguous future.

While it feels like we’re only just getting over the hangover of – yet another! – nineties renaissance, the cultural psyche has shifted focus. Time-travelled to the early noughties. Picture the scene: you’re a TV/film studio head, trying, hard, to think of an original idea. Alas, there’s nada. The creative juices have been well and truly wrung dry. Oh, but what about just remaking something that was great the first time around? This thought stream has gone into overdrive. It feels like not a week goes by without announcing yet another 00s touchstone – Friends, Buffy the Vampire Slayer, Coyote Ugly, Sex and the City – is getting the reboot treatment. Why the obsession to go over old grounds? For those who experienced these shows the first time around, it taps into parts of ourselves that have been lost to streaming sites like Netflix.

“You had to wait for these shows to come on telly, there was real excitement,” Maud, 31, says. “The way we consumed stuff back then was so different to now, which is more just to have on in the background. Obviously there’s still hyped shows, but I feel like that anticipation factor, the waiting game just isn’t as strong as it was in my teens.”

Y2K style, too, is booming. Pre-loved fashion platform Vestiaire Collective has seen an increased consumer appetite for vintage shoulder handbags, bandanas, cargo trousers and logo tees. And Paris Fashion Week presented collections saturated with MTV-era nuances for autumn / winter 2021 this week. Chanel, for instance, made the case for the midriff-flossing belts. (Love or loathe: it was a look). While Lanvin drew inspiration from the music video for Gwen Stefani’s 2004 track “Rich Girl,” (which featured a cameo from Eve.) The lyrics are an unapologetic homage to opulence. To glamour. Essentially the complete opposite to the un-lavish lives most of us have been living:

This is not to suggest the noughties were not void of injury (as anyone whose watched Framing Britney Spears will attest). They were chaotic times, loud, problematic – and thus a fascinating era to revisit decades later. Twenty Twenty – a podcast launched last autumn, from two “self-proclaimed fangirls who grew up on the internet” Simran Hans and Tara Joshi – delves into everything from Destiny’s Child to Big Brother; examining the humorous and poignant parallels between then and now.

Though, on a lighter note, the styles, sounds and screen time this era birthed celebrated something we are all on the cusp of. Greedy for, after months of indoor drudgery. Fun, frivolity, indulgence. As the adage goes: sooner or later, everything old is new again.