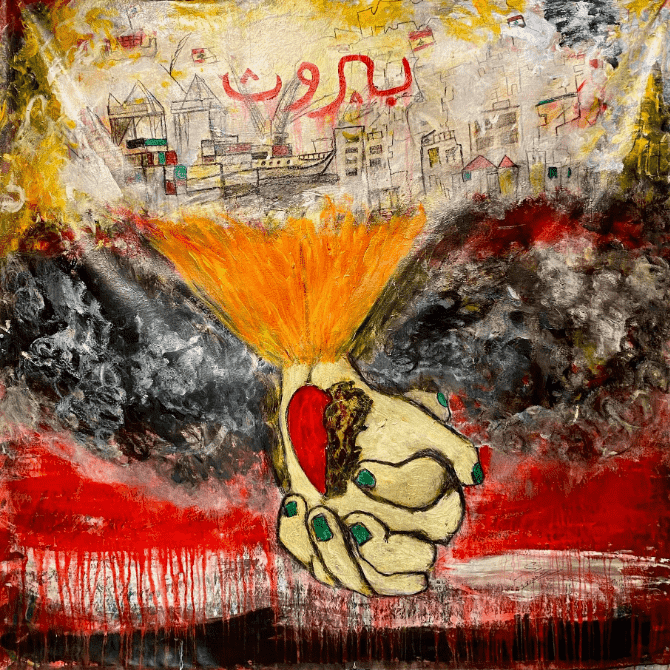 It’s been over 20 days since the tragic explosion rippled through the city of Beirut, causing widespread damage to the city, hopelessness to the country and heartbreak for every Lebanese around the world. Several creatives have come together to rebuild Beirut (it has become a trending hashtag on social media) and although not in Lebanon, Suzi Fadel Nassif is one of those talents willing to contribute to those in need.

The Dubai-based Lebanese artist (who actually used art as an escape during the 2006 war in Lebanon) has created a piece that will be auctioned silently, with all proceeds donated to the Lebanese Red Cross. The piece (sized at 175 x 165 cm) sees Nassif’s bold sense of colours and is painted in acrylic.

The money raised aims to help the Red Cross to transport the wounded, enforce rescue and search missions, help treat victims in critical conditions, and provide necessities such as hygiene kits, food and water to vulnerable families in Beirut who have lost their homes and belonging as a result of the explosion.

The bidding will run throughout the remainder of August and until September 14, 2020 (at 11:59pm GST), and Suzi Fadel Nassif will personally send her art piece to the winner of the auction. You can place your bid on airauctioneer.com/prayforbeirut.

Now, discover how Hussein Bazaza is supporting the Children’s Cancer Center of Lebanon.