The greatest escape? Life on Mars 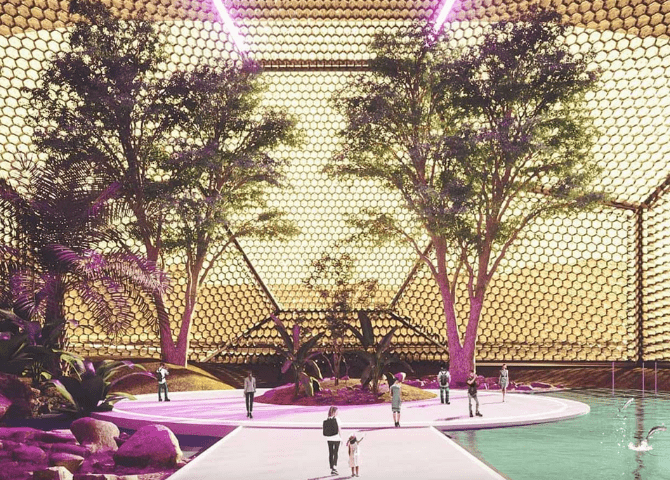 Plans to construct the first sustainable city on the Red Planet have been revealed...

“Where will you go when this is all over?” Ah. The question on everyone’s lips. For some, it will incite extreme answers. For others, simply a day outside of their postcode will be just the right level of unfamiliarity. Whatever camp you fall under, no doubt your taste for dreamscapes has increased, if only to lust over on Instagram. The tour de force of travel destinations in the works? Mars! Apparently.

Architecture studio ABIBBO is said to be building the first city on the Red Planet, based on the latest scientific research. Plans are underway, with hopes that the construction can begin in 2054, finished by 2100. (Nüwa – a nod to the mythological Chinese goddess that created and protected humans – will be the capital city, one of five Martian cities).

So, what’s actually going to be there? It will act like any liveable city, with homes, offices, green spaces, hospitals, schools, shops and more. The city is to be constructed in a vertical way – built into the side of a Martian cliff, to protect residents from meteorites, atmospheric pressure and radiation.

The project’s concept is based on the principle of self-sustainability, that is why the city will only be built from natural materials. “Water is one of the great advantages that Mars offers, it helps to be able to get the proper materials for the construction”, explained Alfredo Muñoz, founder of ABIBOO, in an interview with Euronews. “Basically, with the water and the CO2, we can generate carbon and with the carbon, we can generate steel”. Also, contrary to the Earth, there will be no animal agriculture, the main source of food in the city would come from the cultivation of the crops, which would also produce extra oxygen. And the energy would come from solar panels. Cool, huh?