Now open: Piaget’s new retail concept inspired by the Sunny Side of Life in Abu Dhabi 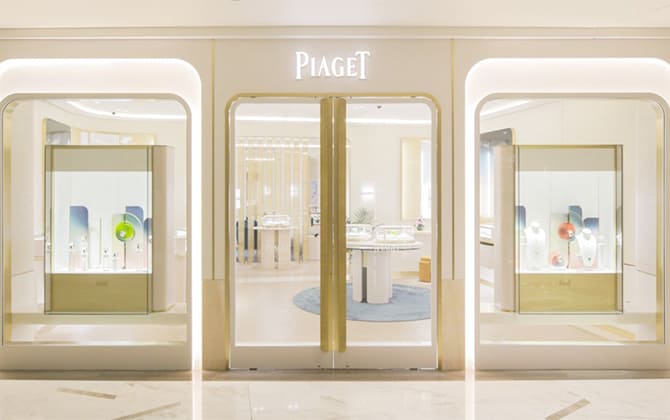 The shopping scene in Abu Dhabi just got a little more luxurious thanks to this new boutique opening...

Nearly 60 years ago, Piaget opened the doors to a space that brought people together to connect and discover the maison’s latest creations — this place was called the Salon at the Rue du Rhône in Geneva.

Its vibrant aesthetic beautifully intertwined Piaget’s colour codes, which are usually found in the brand’s dazzling creations (think gold, white, coral red, pink, yellow and the signature hue, Piaget Blue) and the atmosphere of its historical Salon has now been translated through the walls of Piaget’s new store concept in the UAE’s capital.

Courtesy of its arched windows and glowing facade, the new store appeals to Piaget’s intricate details, gold engravings and its signature Palace Décor in that rich hue of ‘Piaget Blue’ – which is also referenced through the stones used in Piaget creations, such as brilliant lapis lazuli and turquoise.

The new Piaget Salon was also inspired by the ‘Sunny Side of Life’ brand ethos.

The Piaget Salon will exclusively offer a selection of new gold and diamond pieces from the ‘Piaget Sunlight’ fine jewellery collection – the pieces were inspired by the glimmer and energy of the sun. As well, there will be a full range of Piaget jewellery collections, including Piaget Possession and Maison timepieces, including the iconic Piaget Gala.

The new retail concept is now open at The Galleria Al Maryah Island in Abu Dhabi.