TURN UP THE DIAL WITH AUDEMARS PIGUET’S ROYAL OAK TIMEPIECE 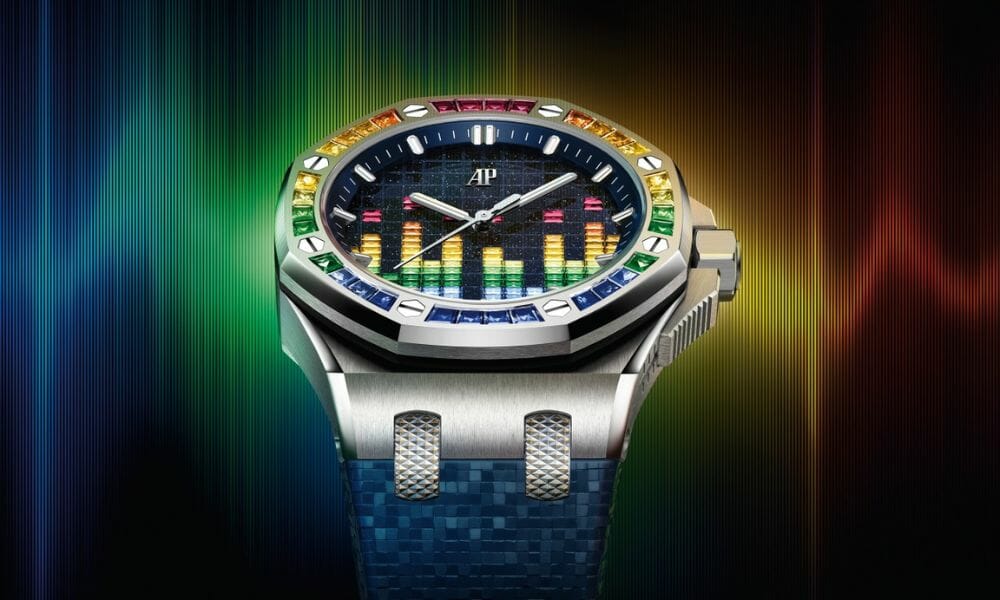 The Swiss Haute Horlogerie manufacturer is paying tribute to the world of music...

In the world of luxury watchmaking, Audemars Piguet is known for its numerous collaborations with various artists, drawing on their inspiration and inspiring them in return. Its also recognised for its valued tradition of crafting timepieces that are out-of-the-box. And its latest Royal Oak timepiece is proof.

Audemars Piguet has constantly created bridges with the music industry over the past 20 years. It first began with the company’s creation in 1875 with the development of chiming watches – and now, it has grown ever stronger.

With a new limited-edition Royal Oak timepiece, Audemars Piguet is paying tribute to the world of music by reproducing the motifs of an equaliser, knurled-textured studs reminiscent of jack plugs and crown guards inspired by the fader on mixing consoles. Offering two diameters in titanium (37mm and 43mm), the self-winding music editions come in a blue dial with printed VU meter, a blue aventurine dial set with coloured “Harmony”-cut stones forming a VU meter and a black dial with a printed VU meter.

A total of five new Royal Oak Offshore Selfwinding Music Edition are interpreted in different materials: two models in titanium, two in gem-set 18-carat white gold and one in black ceramic. They all feature a Tapisserie dial and the ten colours composing the columns of the equaliser are invisibly set with various gemstones: rubies, peridots, tsavorites, as well as green, blue and orange sapphires.

The gemstones also feature the “Harmony” cut – an industry first for larger stones – to echo the dial’s play of light. It’s an aesthetically-pleasing timepiece pulsing with colours.

The five new Royal Oak Offshore Selfwinding Music Edition models are driven by two selfwinding hours, minutes and seconds movements without date indication in order to keep the coloured pattern of the dial in the spotlight: Calibre 5909 for the 37 mm references and Calibre 4309 for the 43 mm models.

ALSO READ: MESSIKA OPENS A NEW CHAPTER OF ITS LEGACY.