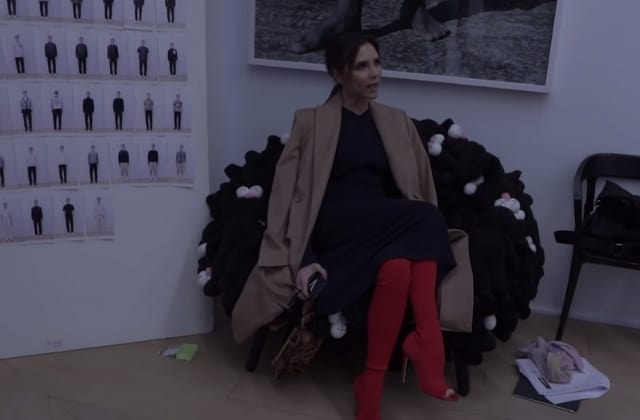 Another day, another brilliant new episode from Victoria Beckham's YouTube channel. This time, she's spending a day in Paris with wholesalers where she not only proves her mastery as a designer but also, as a comedienne...

In the latest upload on Victoria Beckham‘s YouTube channel, the designer/former Spice Girl/mother of four/wife of David Beckham, heads out to Paris for a full day of back-to-back meetings.

Last time, it was the day of her F/W’19 show and now, moving in (kind of) real time, the camera follows her from London to Paris on the Eurostar.

It starts off with a laboriously long walk to the train – “We’re going to walk to France,” quips VB – after which she jokes that “we’re going to drive the train to Paris,” after walking to the end of the platform, which presumably is where the First Class carriages are.

So, she’s “dotting around Paris” to sell the F/W’19 collection to her key wholesale accounts, meet with the press and have lunch with the company’s chairman.

When she gets to the showroom, we see her interact with the buyers, explaining the collection in detail and then it’s in and out of taxis for the rest of the day – where she properly flexes her funny muscles. There’s one moment we particularly enjoyed when she’s in a cab with Paolo Riva, CEO to VB, whom “everybody loves,” she enthuses.

“It’s a nice problem to have when everybody likes you. I don’t have that problem”…*laughter ensues*.

Watch it for yourself here…

Now, ICYMI, the biggest news from Apple broke overnight in California. Check it.