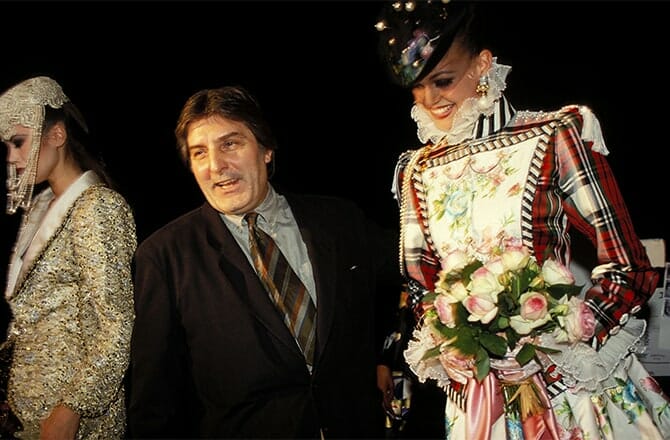 Pioneering French fashion designer Emanuel Ungaro, who trained with Balenciaga and founded his namesake fashion house in 1965, died in Paris on Saturday at the age of 86.

His death was confirmed Sunday on the official Emanuel Ungaro Paris Instagram account. “The Fashion House he founded in 1965 still bearing his name cries today this extremely talented Couturier. He will stay in our memories as the Master of sensuality, colours and flamboyance.”

Emanuel was born in 1933 in Aix-en-Province in southern France to an Italian family. He later moved to Paris at the age of 22 where he studied under the tutelage of the great Spanish couturier Cristóbal Balanciaga. Six years later, he struck out on his own presenting his first solo collection in 1965 with just 17 dresses to show. Earning quick acclaim, he became famous for his feminine designs and bold colours, dressing clients such as Jacqueline Kennedy Onassis and French high-society doyenne Marie-Hélène de Rothschild. After about four decades, he sold the label to businessman Asim Abdullah for $84 million, officially departing the fashion house in 2004.

Fashion model Marisa Berenson took to Instagram to say goodbye to the iconic designer, posting a picture of herself being fitted into a midnight blue evening gown by Emanuel himself. She wrote, “Emanuel was a beautiful, refined and generous man. Elegant at the core of his soul, he loved women, who loved him back. He was one of the greatest designers of his generation and will go down in fashion history….I still wear his clothes; they are timeless, stunning with their colours and their creativeness….Thank you dear Emanuel for having been the friend that you were, you are in my thoughts and in my heart.”

Close friend Milliner Stephen Jones also shared his reaction to the news of Emanuel’s passing on his page. So sad to hear of the passing of the magnificent Emanuel Ungaro,” he wrote. “To work with him was extraordinary. He was also incredibly generous to me showing how his master Cristobal Balenciaga made hats. Here is Natalia Vodianova in 2003 in one if our creations. R.I.P.”

Now, find out all about Amina Muaddi’s new job at Rihanna’s Fenty.