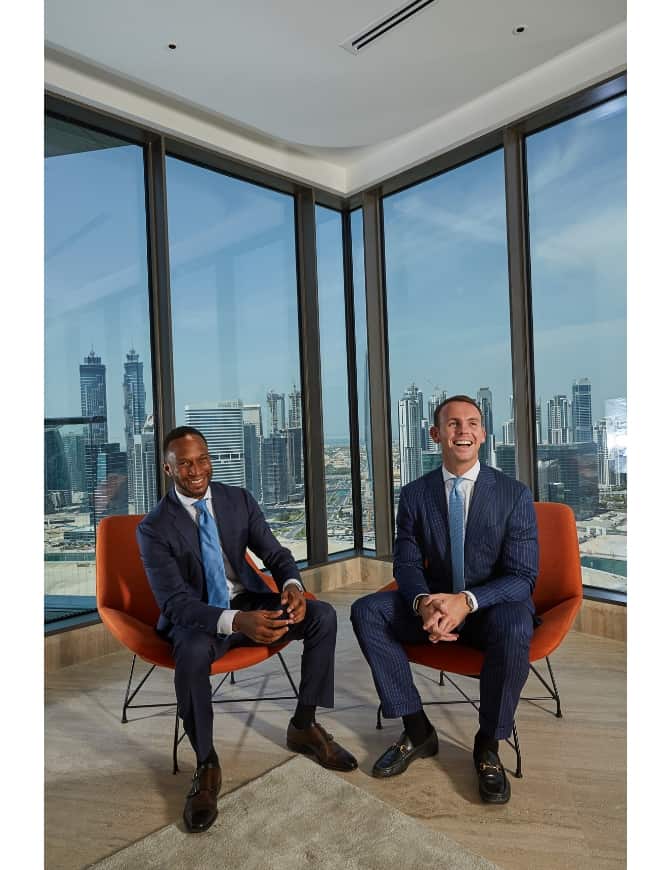 In the market for a new suit? Dubai-based brand Benjamin Siggers should be at the top of your list. Here's why...

Just over one year ago, Matthew Benjamin and James Siggers launched their eponymous tailoring business, Benjamin Siggers, in Dubai. Since then, the brand has caught the attention of the region’s well-heeled businessmen, as well as ours for their pioneering focus on seustainabililty. We caught up with Matthew and James to find out more…

Tell me a little about how the business came to be and why you started it in Dubai?

Matthew Benjamin: In 2012 I moved here as I used to work for a big American company in the Middle East and when I joined them I put together a business plan to open an office in the Middle East which took about two years. Then James joined that office a year and a half in. Why Dubai? We had a client base, essentially. Over that period of five, six years, we built up a client base of 450 guys and so when it came to us putting our heads together to start the business, Dubai was the obvious place because we had the experience in the market and an existing customer base. For us, it’s also a great place to start because it’s not such a mature market if you compare it to somewhere like London so the opportunities for a start-up here are much better and then once you’ve built that brand then I feel you can go into another city much easier with more clout behind you.

James Siggers: The core is custom bespoke clothing. Everything we do is custom-made for individuals. At the moment we don’t have a store so the whole service and convenience of going out and seeing guys is how we operate but what we really want to try and pioneer and represent is a new era of menswear which is sustainable tailoring — things like using a lot of organic wools, organic cottons of which we have our own range. We’re in the process of making our own organic wool and that’s massively reducing the amount of water and pesticides. The bags we use, the packaging, we try to use as much recyclable stuff as possible, and support ethical factories and really try to connect where and how its made with our customer.

How would you describe your customer base in Dubai?

JS: It is quite a mix but I’d say 60-70 per cent are your classic DIFC lawyer/banker/investment guys who wear suits every day. Most of them are your top-level executives and partners who are cash-rich and time poor but want to look good and appreciate the quality and the service we offer.

And how does your process work, from start to finish?

JS: Matt and I will go out and meet everyone and give them a consultation. Some guys are travelling the whole time and just need stuff that’s going to perform.  You have to understand your customer and what he does, who he sees and where he goes. So then we’ll talk him through it, find out what he likes and doesn’t like, measure him up, show him some fabrics and then deliver it six weeks later. Then once we’ve done that and we’ve got a suit he’s happy with, then with that template, in theory, we can then copy and paste things. Having that system and technology in place makes the whole process more convenient.

Why was having a sustainable business important for you?

MB: We felt that it was the right thing to do. It really should be common sense in a way, shouldn’t it? Sustainability is niche but really it should just be the way things are because you can make a suit or a shirt or a piece of clothing without going down the route of using fertilisers and pesticides which are damaging to the environment and aren’t good for you wearing it. It doesn’t actually have to be more expensive. So from one side it was because it was the right thing to do and from another we looked at it from a business angle — commercially, as a USP, we wanted to do something that was different. We wanted to find an area that we could really pioneer. It made sense. Now, a lot more companies are starting to implement sustainability but with us, because we started from scratch we could really integrate it as a core thing and that gives us an advantage because for the big massive companies, for them to become sustainable is near impossible as it’s too much upheaval, whereas for us we could build it in. So we decided to have clothing that was handmade in Italy using sustainable materials.

In terms of developing your own materials, how does that process work and how long in the making has that been?

MB: Starting the process of looking into it began in October of last year. I’d gone to a sustainability conference and met some wool suppliers there and what we found was that we couldn’t get the quality of wool that we wanted. The clip, which is when they shear the sheep, is every October so we were a bit late then anyway but the quality then wasn’t the high quality that we wanted and that we had used previously for suits. It’s one thing to be sustainable but it still has to be desirable. I came across a mill in Argentina and started a conversation about how we could source organic wool from them, if we could get a slightly higher quality, and we could. The process has now started so this month, we’ll sign and get the wool. Then, the process begins as we have the raw material but need to get it woven and then spun, and there’s quite a few more steps! (laughs) It won’t be until April next year that we can actually go and offer clients organic wool. So it’s a bit of a process.

But one that has a long-term pay-off.

MB: Yeah exactly. So the goal with this batch of it, which is about 300 metres worth so 100 kg, is that this is our proof of concept.

The way the business works at the moment, in terms of fashion brands and tailors, is that a tailor will go and buy fabric per metre from a merchant, the merchant will go and get the fabric from a mill, and a mill will get the fabric from a weaver and they’ll buy the fabric from the farm so along the way there’s all these middle men and the price keeps going up by the time it gets sold to the client. The whole idea of going to get the wool from the farm is to essentially cut the middle man out so that we can then offer, not only a higher quality constructed suit, but organic material without having a massive price point so it almost makes it a no brainer.

Have you felt like there’s been an education process with the consumer here around the sustainable materials or does it not really matter because the suits are the quality that they are?

JS: No one really knows the real impact of the whole production line and how fabrics are made. It’s like when you walk into a supermarket, you’re so disconnected as to where it comes from and you see it as it is but most guys when you start telling them about how the fashion industry is the second worst polluter on the planet, they’re like, wow I had no idea.

It’s like 1500 litres of water to make a shirt, and people can’t believe it.

MB: Yeah it’s an education process. The benefit that we have at the moment is that we go direct to the customer so we’re able to really educate them about. The difficulty is, and you may have come across this, is how do you make sustainability sexy? It’s something we’re still figuring out, and the industry is still figuring out, and I’m sure it will. The benefit for us is that when we go and see a client, the guys that we’re working with are at a higher level so we don’t have to make it sexy, we just have to educate them on why you should buy from here.

Ultimately it still has to fit, perform well and look good because if it’s sustainable and it doesn’t do those things, no one is going to buy it again. And that’s why it was important for us to consider where we got the pieces made and how.

So the sustainability element translates beyond the materials to the people that you work with and the way the clothes are made?

MB: Most of the factories we work with are family-run companies so they’re not massive. They’re not small, tiny artisanals because they wouldn’t be able to deal with the number of suits that we need. So for example our suit workshop is about 40 people and when we were visiting others there were hundreds and hundreds of people on the work floor. They’re all nice people to work with and more importantly they treat the people working there really well. It’s always great to go and visit them. I feel like I’m part of the family! (laugh).

JS: The last time they started kissing us when we arrived so we’re made men now. (laughs).

MB: We’ve seen where some [items of clothing] get made and it wasn’t something we wanted to support. The guys that we work with, none of them have worked in those conditions which was important to us.

And I think, increasingly, there’s a customer that wants to know that the items that they’re wearing haven’t cost someone their health or their life. You look at brands like Reformation or Everlane who are growing in popularity and their supply chains are so transparent to the point where you can see the exact factory the clothes were made in.

MB: Our new website it Everlane-ish. It goes into where the things are made and there’s a part in there where we’ve done 360-degree videos so you’re actually in the workshop and you can look around and see people actually working and the girls talking and laughing. You really get a feel for where what you’re buying is actually from.

MB: Yeah we’d like to get to that point where we have ready-to-wear lines, being like Mr Porter, and to have other complimentary items which are all sustainable. When I was speaking to this guy in Argentina about sourcing enough of the high quality organic wool, he said you can either set up a contract and we can breed them especially or you can buy a farm (laughs). So, eventually we’d like to buy a farm so we have as much organic wool as we want and we can have ready-to-wear lines of jumpers and jackets.