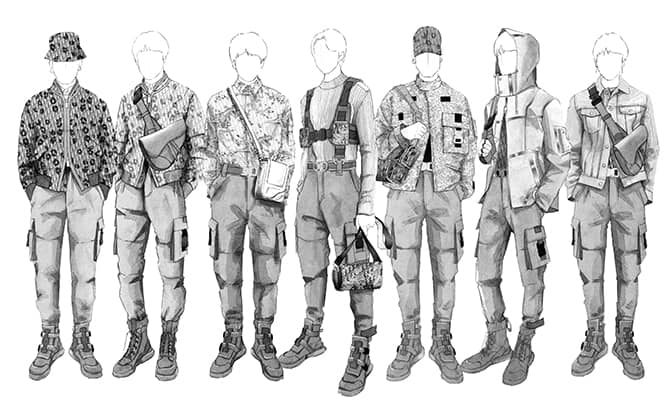 Kim Jones can officially say that he's created a full wardrobe for a music tour this week...

It’s no surprise that major fashion houses are continuously teaming up with celebrities for their on-stage performances. It’s been happening for many years now – remember that iconic corset by Jean Paul Gaultier spotted on Madonna during her Blonde Ambition tour? Gucci also dressed Florence Welch for her global tour, as well as Harry Styles.

So now, it seems like Dior is following in the designer-led footsteps and will be designing tour outfits for one of the major boy bands of our time.

Kim Jones (who’s been at the helm for over a year now), has created exclusive fresh new looks for the K-Pop boy band, BTS. Currently on their Love Yourself: Speak Yourself tour (which kicked off in LA earlier this week) this marks the first time that Dior has created men’s stagewear.

With seven members in the band, Jones created a series of seven stage costumes based off of his modern, yet very utilitarian, silhouettes from the maison’s Pre-Fall ’19 collection.

“I love BTS because they are really great guys and also super into fashion,” said Jones. “Everyone I know is kind of crazy about them!”

And yes, it is true. The Korean band are capturing the hearts of millions of fans globally.

Now, take a look at what went down at the Dior Cruise 2020 show in Morocco.