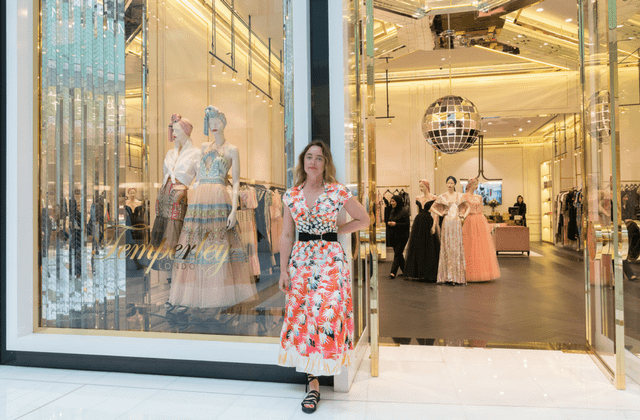 British designer Alice Temperley is back in Dubai for a whirlwind 48 hours and we stole a quick few minutes of her time to chat...

Meeting Alice Temperley in her newly refurbished Dubai Mall store, it’s the first time the designer has seen the space in person herself. “I have seen examples of all of the mirror work and the beveling, and now I would love to have all this detail put in my house,” she tells me with a laugh.

The store opened again in September, following an extensive refurb to change the layout to something that “was a little more intimate,” Alice explains. Sitting on the plush lounge chairs in the rear of the store, we spoke to the designer — whose pieces have been worn the likes of the Duchess of Cambridge and Beyoncé — about the changing fashion scene in the Middle East, the need for change in the fashion cycle and why sustainability is more important now than ever.

You’ve been to the region on multiple occasions, how has the fashion scene changed here from your point of view from when you first came until now on this trip?

It’s much more open. Before when we’ve been here we were having to do much longer gowns, longer lengths, longer sleeves, fairly conservative, and were being pushed to do a lot more kaftans. Now, we have more of an offering of a younger, more youthful, slightly shorter dress that you can wear underneath things. We’re noticing that the local market, especially the younger generation, are buying much more playful things.

How would you describe your Middle Eastern customer? How do they differ from your European customer?

They’re not afraid to dress up. My Middle Eastern customer will wear something beautiful at lunch time, at dinner, whereas often English people can be a bit more conservative and only do that when they travel, when they’re in the Riviera or Ibiza. They save it for that summertime dressing whereas here with the climate, with the heat, people focus a lot more on themselves so they’re more groomed and very fashion-savvy.

Is the millennial consumer one that is growing for you or has it always been a core market for the brand?

Growing I’d say. We were perceived over here before as quite an evening-focused brand and now Temperley London has a lot more day offerings so that younger generation can buy into it and get their heads around it a lot more easily. You might buy a gown for something but a lot more people, especially millennials, are dressing in a funkier, more fun way. So we have to do things that are very much Temperley-esque, and true to the brand, but that they will buy into, which is why we’ve done a lot of prints and shorter lengths.

What else have you got coming up for the brand this year?

Apart from the shows, it’s about really focusing on growing and focusing on brand identity. We just did a great shoot with Ellen Von Unwerth and we’re doing another on in the desert in Spain with bikes — we’re just creating more content and thinking about how you can break the cycle of doing things because you’re expected to do them. So creating more content around seasons, working out if we can get earlier deliveries, mixed deliveries and looking at the fashion makeup of how everybody does it because they think they’re supposed to do it, whereas Alaïa for example, one of the best mavericks in fashion, did what he wanted when he wanted, so why can’t we be a little more confident to do those things?

There’s so much to be done in the world of fashion. Fast fashion is the main massive offender by a very long while because of the disposability, chemicals, tanneries, all causing total destruction.

In terms of the brand identity, how has it changed over the years?

It’s probably back more now in the latest collections than it was for years of splitting up to be a diffusion line and a main line, because it now has day and evening in one. It’s just important to have everything under one name and one collection, so everything from day to evening, for one muse. And that’s kind of how I started, I had knitwear and then jackets and evening dresses, because it was all one wardrobe for me. So now having one collection helps us to do that. It’s about focusing and doing less and just really enjoying it because if you enjoy it and you love it, it comes out in the clothes.

How do you feel about ‘see now, buy now’? Is that something you would consider?

No but I think that if you’re a big brand and you’ve got lots of your own stores and can do your own buys, you can tell your advertisers what they’re going to be shooting, what you want advertised, you can control it. But when you’re more of a specialty brand like we are you can’t just pre-buy all of your wholesale, nor can you embargo everybody to not write about it for a season but what I think is interesting is that if Spring/Summer and Autumn/Winter are shown together because if you’re showing Spring/Summer in September, Spring is just about to arrive. I think there should be fewer collections a year but with the same amount of deliveries.

Plus, it would mean buyers only have to fly around the world twice a year as opposed to four. It’s more eco-friendly that way, it means we have to do one less look book, we can still deliver it but we just have to plan it properly. And if people don’t get excited enough than that’s ridiculous! But they will because they will have new deliveries in the store. People do too much product, basically.

And touching on the eco-friendly aspect, is this something that’s important to you as a designer?

Yes, we just got the Butterfly Stamp, which means we’re working towards [being eco-friendly] and we’ve been awarded for our efforts so far. It’s really trying to keep the footprint down — so if we’re printing fabrics in Europe, they’re made in Europe and using more fabrics that are sustainable within some eveningwear groups. It’s also about making sure it’s not just about the fabrics, but manufacturing, everything. There’s so much to be done in the world of fashion. Fast fashion is the main massive offender by a very long while because of the disposability, chemicals, tanneries, all causing total destruction. So it’s about everybody doing slightly less and not just on the clothing but the expectation of the amount you put towards a show, the amount you do — all of this, doesn’t need to be so intense. I think so many people think that the more you do the better it’s going to be but that’s absolute rubbish.

The Temperley London store is located in The Dubai Mall’s Fashion Avenue.