In town to discuss the late designer and his legacy
September 6, 2018
Meeran Mekkaoui 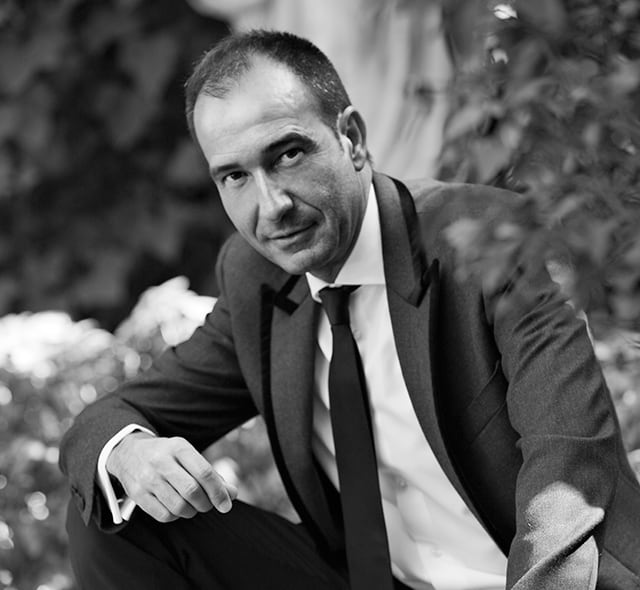 We've always known the long-standing history of maison Givenchy but Eloy Martinez gives us a deeper look into the life of the renowned designer, his iconic muse and how the brand has evolved since the '50s...

n 1952, Hubert de Givenchy founded his own fashion label with hopes and dreams of becoming a renowned and respected fashion designer alongside Gabrielle Coco Chanel, Christian Dior and Cristóbal Balenciaga. Evidently, he turned his dreams into a reality. One of the most buzzed-about labels, maison Givenchy has remained true with its traditional values and exceptional craftsmanship over the course of its history.

Eloy Martinez was a close friend of Hubert de Givenchy (who sadly passed away, aged 91, earlier this year) — in fact, he was dubbed as the official biographer of Givenchy. Martinez has passionately dedicated his life to continuing the late designer’s legacy with curated exhibitions and retrospectives around the globe.

Currently in town, Martinez sat down with Buro 24/7 Middle East to discuss pinnacle moments on Hubert de Givenchy’s road to success (which eventually included one of the world’s most famous stars, Audrey Hepburn), how the maison’s couture and collections have evolved over the decades and the powerful impact of Clare Waight Keller‘s designs and Meghan Markle‘s influence…

Considered to be one of the greatest fashion partnerships of all time, can you tell us more about Hubert de Givenchy’s relationship with Audrey Hepburn?

I think that their relationship changed the world of fashion. All of the designers were able to make beautiful haute couture fashion for clients, but for Hubert de Givenchy, it was all thanks to one, and that was Audrey Hepburn. Their relationship really changed the history of fashion. They met in 1953 and both of them were really young (Hepburn was 24 and Givenchy was 26), and both of them were just at the peak of their careers and it was really such an equal relationship. It was really much based on real values and they liked the same things, they were both generous people, they really loved family and they were very much into humanitarian causes. It was complicity and a connection that made the relationship really unique.

Hubert used to tell me that sometimes during the shooting of My Fair Lady, Audrey would call him in the middle of the night to say: “Hubert, I just want to tell you that I love you”, and he would then say: “I love you too”, and then just hang up. They loved each other.

All of the Givenchy creations worn by Audrey had an impact in the fashion world but the iconic black dress from Breakfast at Tiffany’s is perhaps the most famous LBD of all time. Why do you think it had, and still has, such a major influence on fashion?

You know, when we talk about the LBD in the world of fashion, it was created by Chanel in 1929. But, the one that made it popular was Audrey Hepburn in Breakfast at Tiffany’s. The dress was iconic but it was because of the iconic film. It’s a really simple dress but there was a little cleavage in the back that was quite special. Everything was so perfect to what Blake Edwards wanted for the role of Audrey. The Givenchy dress became a dress of sophistication, and to have a very natural woman play the role was something that became successful the same year the movie was released. It’s funny because all of the pictures of her wearing that dress have become a symbol of elegance that you see around the world. There is some sort of magnetism with that dress that has made it so amazingly popular.

Back then, Givenchy’s haute couture creations projected a symbol of power, do you still think that fashion still has that effect today?

I think that haute couture, in general, has changed profoundly. I think that the client of couture does not exist anymore. When we talk about couture today, we talk about the couture on the red carpet, the people that wear couture on the red carpet don’t actually pay for couture and because of that, the brands have decided to make couture much closer to the way of living. However, I think that now, we are getting back to how it was with the work of the artisans that are behind the couture being shown in a few short films online. We can see all the work that goes on behind the veil, the dress and the couture. I think that the new generation can really appreciate the work of the couture.

And how different do you think the couture collections have been since Hubert de Givenchy retired in 1995?

Oh well (laughs), I think it started because the paramount of the clients have changed completely. In 1995, it was Madonna who started to wear Givenchy from John Galliano’s designs, after that, some clients preferred the work of Alexander McQueen and then the couture changed with Riccardo Tisci. Now, with Clare Waight Keller, we’ve seen a big change and Hubert de Givenchy appreciated that. He appreciated what Clare had done for Chloé and the references that she had under her belt, they were the same kind of people that Hubert appreciated very much. I think that the couture Clare is going to create, I believe, is going to be much closer to the role of femininity that Givenchy used. It’s much closer to the women, and to the kind of beauty that Hubert de Givenchy looked for during his first decades of his maison.

Speaking of Clare Waight Keller, Meghan Markle chose the designer to create her wedding dress and several other pieces after that. Even though it’s very recent, how has the Duchess of Sussex’s Givenchy choices affected the maison?

Meghan Markle is just magnificent. First of all, her personality is very close to the millennials, in terms of that she is a very free girl and she is very fresh. The beauty of Meghan Markle really connects with the millennials. I think she has been really great for the brand, because I believe that Meghan portrays, very much, the beauty, the femininity and at the same time, the power of a woman. She had the will to go on her own for her wedding on that day and it’s the kind of woman that Givenchy adores. She had an enormous confidence in herself that day, where she walked on her own, wearing a dress with absolutely no embroidery on it, just a strong cut and simplicity. The values of the brand match the values of Meghan.

Shifting to beauty, how have the beauty collections evolved since entering the market in 1957?

Beauty has always been important for Hubert de Givenchy. He always said that a woman is not dressed up until she has earrings and a lipstick. For Hubert, makeup was essential. The beauty department now has discovered the heritage of the brand and even the lipsticks and the products have incorporated the 4 G’s of the brand and the packaging is all beautiful. This was important to Givenchy. He wanted the powder boxes to be beautiful boxes because he always said: “When you take out a product from your bag, it has to be very pretty”.

You’ve curated several of exhibitions dedicated to the maison around the globe. In your opinion, how do fashion and art go hand in hand? And how do you translate that into your works?

In all the exhibitions I’ve done for Givenchy, all are a work of art. When we did the exhibition in Madrid, I mixed it up with pieces of art from his collections that were archived in his museum. Art has always been an inspiration for fashion designers but fashion has always been in the museums forever. When you see paintings of the Renaissance or from Botticelli, you’ll always see fashion in their paintings. The museums are also discovering that thanks to fashion and they have new publics coming into their museums. There are younger people coming into museums in order to discover Givenchy, the man behind his logo, and a man named Hubert, who created all of this 70 years ago.

Can you recall your favourite memory of Hubert de Givenchy?

My favourite memory would be the Thyssen-Bornemisza National Museum in Madrid when we were preparing his retrospective. At 10 o’clock in the evening, it’s been a long day and he didn’t want to leave without finalising the exhibition by putting on some earrings and a necklace on some of the mannequins. I said to him: “Hubert, you are really tired” and he said: “Eloy, we have to. Because the public will have to see this dress in full beauty”. And to see an old man, someone who is 84 years old, exhausted but wanting to stay in the museum just because he wanted the public to understand what beauty was for him, just that moment of the two of us there, is something I will never, ever forget.

Now, find out when you can see Clare Waight Keller’s designs for Meghan Markle’s wedding dress up close at an upcoming royal wedding exhibition.