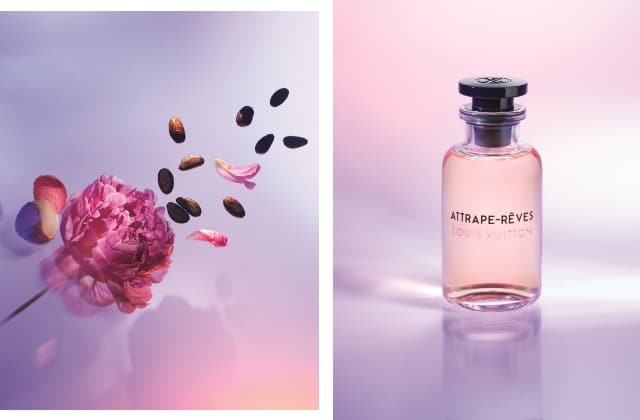 Looking to add a new scent to your shelves? Louis Vuitton's newest release is just the one...

Called Attrape-Rêves, which means dream catcher, the scent is fantastically light with a warmth not possessed by its predecessors in the female fragrance category. Created by Jacques Cavallier Belltrud, the fragrance boasts a unique main note of African cacao flower that’s expertly blended with peony, a small touch of patchoulol, lychee, Turkish rose, ginger and bergamot, the latter two of which are used to amplify the impact of the other ingredients. It’s an interesting mix of ingredients, as Jacques notes, saying, “It’s a dialogue between precious ingredients that, in theory, have no reason to cohabit. And yet, on the skin, they converse, interfuse, crepitate and command attention.”

According to the brand, the scent was designed to evoke the feeling of memories when they come upon us; a fragrance that “stirs all the senses and celebrates our capacity to experience awe.”

As with the brand’s other fragrances, Attrape-Rêves is available in a refillable, customisable bottle in either 100ml or 200ml, and can be housed in the brand’s monogrammed fragrance travel cases. It will be available in store from September 13.

Until then, read more about the major new law passed in California regarding product testing on animals.